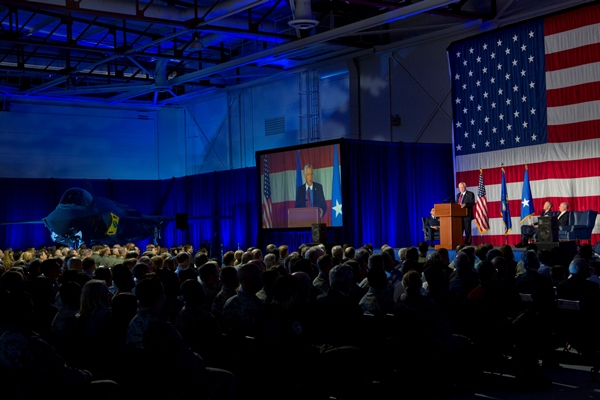 FORT WORTH, Texas, March 19, 2013 – Three Lockheed Martin F-35A conventional takeoff and landing (CTOL) aircraft were officially welcomed by the U.S. Air Force Warfare Center at Nellis Air Force Base, Nev. during a commemorative ceremony today. The jets are assigned to the 422nd Test and Evaluation Squadron of the 53rd Test and Evaluation Group.

“For more than 50 years, it’s been our privilege to support the Air Force mission, and we’re honored to deliver the first three F-35A CTOL aircraft to Air Force Warfare Center,” said Orlando Carvalho, executive vice president of Lockheed Martin Aeronautics. “The work done by the Nellis team will forge the F-35 into the fighter of the future and test it to its limits. Their skilled pilots and maintainers will take the F-35’s performance to new heights and define the tactics the F-35 will one day use to defend freedom around the world.”

The first three operational-coded 5th Generation F-35A CTOL fighters at Nellis mark the beginning of operational testing and evaluation at the base. To date, 24 CTOL aircraft have been delivered to the Air Force and 58 aircraft to the Department of Defense.

The 422nd TES is a composite squadron that executes Operational Test & Evaluation for the F-35. The squadron conducts tactics development, foreign materiel exploitation, and special access programs to optimize system combat capability. By 2019, a total of 12 F-35As will be assigned to the base for testing and evaluation.

Read the Nellis AFB story from the event.