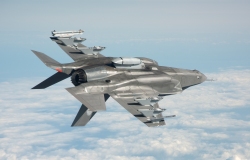 Following a Forbes report from earlier this month arguing that despite some public perception, the F-35 Lightning II Joint Strike Fighter program is actually “progressing nicely,” news from Lockheed Martin this month shows that the F-35 progress continues, with the 5th generation fighter meeting some critical testing milestones recently.

According to the release:

On June 14, F-35B Joint Strike Fighter test aircraft BF-2 completed the first test flight for the short takeoff and vertical
landing variant with an asymmetric weapons load. Cmdr. Eric Buus flew BF-2 with an AIM-9X Sidewinder inert missile on the starboard pylon, a centerline 25 mm gun pod, and a GBU-32 and AIM-120 in the starboard weapon bay. Significant weapons testing for the F-35B and F-35C variants is in progress, including fit checks, captive carriage environment characterization, and pit drops. Aerial weapons separation testing is scheduled for this summer.

The F-35B is the variant of the Joint Strike Fighter for the U.S. Marine Corps, capable of short take-offs and vertical landings for use on amphibious ships or expeditionary airfields to provide air power to the Marine Air-Ground Task Force. The F-35B is undergoing test and evaluation at NAS Patuxent River prior to delivery to the fleet.

Additionally, some truly spectacular photos and videos have made the rounds in the defense and aviation blogosphere lately, showing the first successful night flight of the F-35C, the carrier variant.

Check out the video below, and read more about this night flight at F35.com.