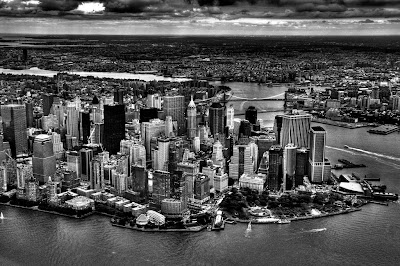 By Jonathan Eyler-Werve for the Global Integrity Commons

The former chief economist of the International Monetary Fund offers a sweeping and articulate indictment of the US financial system. Simon Johnson argues that blaming favorite policies of the right or left misses the larger point: that the financial sector grew so large that oligarchs dictated policy to government, most of which passed without a blink. It’s a pattern, he says, that looks a lot like a financial collapse in an emerging market, but will be, in the end, much much worse.

It’s a long essay, but absolutely worth reading: The Quiet Coup, published in The Atlantic.

Typically, these countries [seeking IMF assistance] are in a desperate economic situation for one simple reason–the powerful elites within them overreached in good times and took too many risks. Emerging-market governments and their private-sector allies commonly form a tight-knit–and, most of the time, genteel–oligarchy, running the country rather like a profit-seeking company in which they are the controlling shareholders. When a country like Indonesia or South Korea or Russia grows, so do the ambitions of its captains of industry. As masters of their mini-universe, these people make some investments that clearly benefit the broader economy, but they also start making bigger and riskier bets. They reckon–correctly, in most cases–that their political connections will allow them to push onto the government any substantial problems that arise.

Johnson argues — convincingly — that the United States was no different, noting that at its peak, the finance sector accounted for a staggering 40 percent of corporate profits, a fortune built on hidden and unsurvivable risks. And when Depression era rules put the brakes on this growth, they had them cast aside. Global Integrity reported on the clash of corporate titans and the SEC in 2007 (spoiler: the titans win). Johnson says that the limp performance of the SEC is only part of the story, noting the massive flow of campaign contributions, but pointing out that the revolving door between Wall Street and Washington and the pure mystique of all that wealth may have had greater influence.

Here’s what it got them:

From this confluence of campaign finance, personal connections, and ideology there flowed, in just the past decade, a river of deregulatory policies that is, in hindsight, astonishing:

• insistence on free movement of capital across borders;

• the repeal of Depression-era regulations separating commercial and investment banking;

• a congressional ban on the regulation of credit-default swaps;

• major increases in the amount of leverage allowed to investment banks;

• a light (dare I say invisible?) hand at the Securities and Exchange Commission in its regulatory enforcement;

• an international agreement to allow banks to measure their own riskiness;

• and an intentional failure to update regulations so as to keep up with the tremendous pace of financial innovation.

The mood that accompanied these measures in Washington seemed to swing between nonchalance and outright celebration: finance unleashed, it was thought, would continue to propel the economy to greater heights.

Johnson notes, as we have on many occasions, that mustering political will to confront this corruption of the policy process is the central challenge. The technical work to set up effective rules and boundaries are a relatively minor issue.

Will the IMF even timidly suggest the sweeping interventions that former-IMF economist Johnson thinks are desperately needed? If the upcoming G20 meeting looks to be any indication, no way. Once again, we run into the issue of powerful international organizations that are effectively prohibited from critiquing their national government sponsors.

Back in 2007 while at the IMF, Johnson was quietly pointing out “risky loans, relaxed lending standards and high leverage” that have since blown up the US economy. He resigned after 14 months on the job, despite telling colleagues he intended to stay several years. No one likes to hear bad news all the time, even if it’s right.

The link again: The Quiet Coup

— by Jonathan Eyler-Werve for the Global Integrity Commons

You Can Forget Joe Biden’s Afghan Disasters Now. He’s Got New Distractions for Us

Kamala Harris Plays Around, as the US Border Is Overrun
Nick Arama

The Photo That Sums Up the 'Far-Right' Rally That Terrified DC and Liberal America
Townhall
'This is not science': Ted Cruz and Thomas Massie comment on the viral video showing a daycare worker trying to mask a child
Twitchy
Biden Says Something Completely Ridiculous, but Doesn't Even Realize It
Redstate
Joe Biden's Presidency Is Hanging by a Thread as Radicals and Moderates Go to War
PJ Media