By evilbloggerlady | Nov 19, 2016 1:09 AM ET
Share Tweet
Share
Tweet
Republicans Leaders don’t always have good nights at the theater. The crowd both booed and cheered Mike Pence (mostly booed). And the cast egged the booing on–which especially too bad. I know Lin Manuel Garcia and the Hamilton cast are mostly all Obama fans (and were actively working for Hillary Clinton to win)–but they should have been better than they were during this performance. If they are trying to persuade VP Pence, why attack him? I guess the ones booing forget Alexander Hamilton was a Republican too.

They certainly have the free speech right to do it, but can you imagine the outrage if Barack Obama or Hillary Clinton got booed and jeered like this? I remember the utter outrage when Joe Wilson yelled out “you lie” at the first State of the Union.  Rep. Wilson apologized (and rightly so–you should not yell out at the State of the Union), but as it turned out, Barack Obama absolutely did lie about Obamacare. Opps.
The cast asked VP Elect Pence to ‘uphold our American values.’ Okay, how about giving Trump and Pence a chance to prove it? Perhaps you will be pleasantly surprised by the results.

Last night reflected poorly on the cast of Hamilton. Rather than really trying to reach out to Trump and Pence, they just show their partisan position. I know they are huge Obama supporters and big fans of Hillary, but Lin Manuel’s dad used to work with Ed Koch. Ed was a democrat who reached out to all voters. I often disagreed with Ed on policy, but it was hard to dislike the guy personally and he made you think. Perhaps Lin Manuel Garcia and the Hamilton cast should consider their “conversation” in that light. 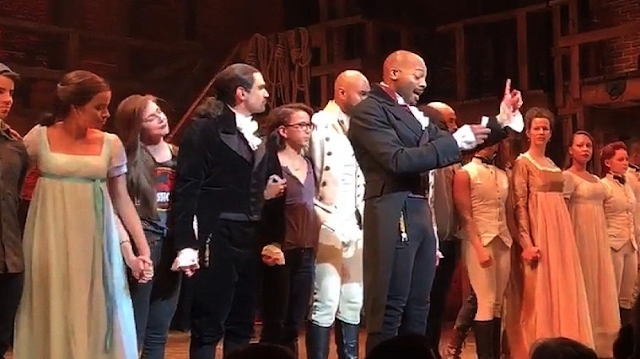 Twitchy: Conversation? How about lectured?

RedState: Hamilton message and Still not getting it

Hot Air: Cast of Hamilton give Mike Pence a message

TOM: You’d probably get a warmer reception in Vanuatu than Pence got at Hamilton

Last Refuge: VPE Pence gets booed and called out by SJW cast during performance of Hamilton on Broadway

Instapundit: Trump is not even in office and his opponents are going insane,  The Cast of Hamilton just held a Trump fundraiser!, What law professors forgot and what Trump knew (and by the way, Alexander Hamilton was all for rule of law)