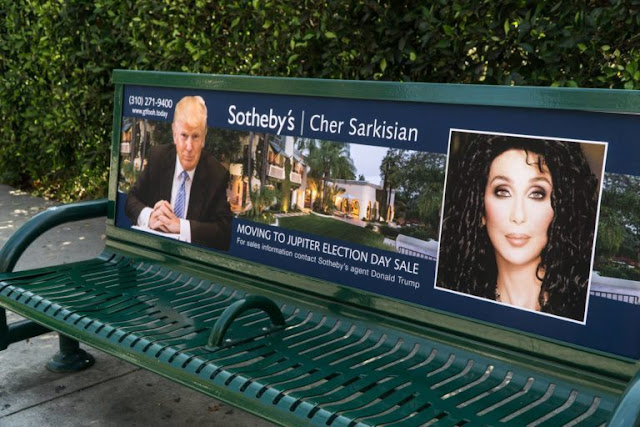 Powerline: Real Estate Ad Street Art in LA and the Great Liberal Freakout
Art is great therapy…
EBL: Unfortunately Celebrities on the Left will not live up to their promises to leave…
Hey, I know how they feel. I felt about the same after Obama won re-election (my flawed candidate at the time lost to what I thought was a much worst candidate). Here’s some mental health advice to the Democrats–work out your grief. Although, my idea of step seven was to accept that Obama would probably destroy the Democrats and he most certainly did, with plenty of help from the Clintons.  The Left (and #NeverTrumpers) will assume Donald Trump will do the same to the GOP and conservative causes. While that is certainly possible–it is not guaranteed and I would encourage the right to help assist Trump in a way that doesn’t happen.

The best thing Trump could do is not give in to hubris or the bait the left will throw out there, but to steadily push through his primary agenda:  1) A solid conservative SCOTUS pick for Scalia’s replacement (and get the Senate to remove the filibuster); 2) get Obama to pardon Hillary as he goes out the door (that removes the issue and makes the Dems acknowledge that there was something to pardon); 3) Kill ObamaCare (it needs to be put down); 4) Address Immigration and Border Security (which granted will face a lot of resistance)–but which initially could be as simple as fines for employers who hire illegals and improving border security and a plan for tracking overstays on visas and reversing the insane plan to bring in more Syrian refugees; and 5) Kill Obama’s Iran Deal.If Trump accomplishes just those in his first term (and I think he could conceivably accomplish most of them in his first six months, that would be a heck of a legacy by itself). It would evicerate Obama’s failed legacy.

President Obama and President-elect Trump both just did their country proud. pic.twitter.com/GGfUWun3lp

Mark Steyn: When Everyone Is Hitler, No One Is Hitler
JWF: Obama White House Staffer In Tears Waiting for President Elect Trump to Show Up
Rush Limbaugh: He’s getting nervous about Trump siding up with the Losers
Share
Tweet
Register Login to Comment
TRENDING

Former CDC Director Gives Alarming Statistic on Fully Vaccinated COVID Deaths
Townhall
Condoleezza Rice talks some sense into the hosts of 'The View' regarding critical race theory in schools
Twitchy
Inject Into My Veins: Condi Rice Stuns 'View' Hosts With Knockout Argument Against Critical Race Theory
Redstate
They're at It Again: The Left Is Using Its California Playbook in Virginia
PJ Media