Election Night Behind The Scenes: Hillary Clinton Cried Inconsolably and Blamed James Comey and Barack Obama for Her Loss... 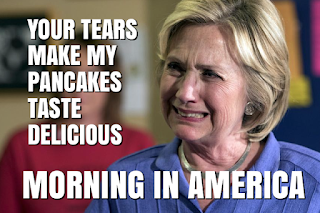 Hillary followed my advice: Cry It Out!
EBL: Overcoming Grief, Hillary’s Tears, There’s Got To Be A Morning After, Election Night, and Comey The Clown
Is it true?  It sure sounds plausible. I am sure Hillary hates Comey right now and we knew there was no love loss between the Obamas and the Clintons. As reported at Newsmax:

“Eventually,” he continued, “her friend said she could make out that she was blaming James Comey, the director of the FBI, for her loss — and this I don’t understand exactly — and the president of the United States for not doing enough.”

“She said: ‘Well, she felt, Hillary felt, that the president could have stopped Comey a long time ago, because that’s what [former President] Bill [Clinton] said.”

Obama did interfere for Clinton with Comey and the FBI, but there was only so much Obama and the Justice Department could do without it backfiring on them (heck, it still could). Obama must be thinking, why didn’t he back Biden? Oh well, it couldn’t happen to a better bunch of bastards.

Instapundit: Everyone will be Hitler for 15 minutes, Unbearable Smugness of the Press. Obama-Trump meeting scheduled for 10 minutes went for 90, the revenge of Scott Brown, University of Michigan did what post election?

Powerline: Civil War on the Left