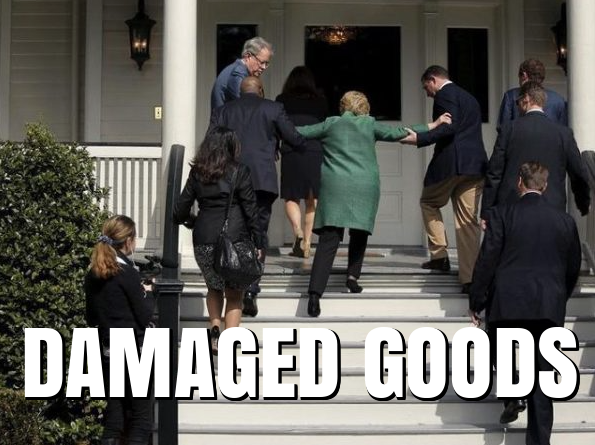 Even if she wins, Hillary is significantly damaged…

During the Cold War, the Russians mastered the use of slow-acting poisons to kill victims long after they were stabbed with an umbrella tip. Fittingly, the WikiLeaks emails may act like ricin or anthrax, wreaking havoc on Clinton’s presidency long after they’re released. In a normal election year with a normal GOP nominee, the WikiLeaks revelations might prove fatal to Clinton’s candidacy. Instead, it seems almost a sure thing that they will poison Clinton’s presidency for years to come. The allegations of pay-for-play between her foundation and the State Department, her speeches to Wall Street, the animosity of some of her closest advisors for Catholics: All of these things will have a long half-life. As will her manifest lies about the use of her private server.

I suspect many Democrats are secretly hoping Hillary can be forced out before she causes too much damage to them.  Hillary Clinton will have to die or be impeached first, she will never voluntarily walk away.

Instapundit: Yes, the process is rigged, Vodka Pundit: In with the outliers, Wikileaks poisons Hillary’s relationship with the Left

Wombat: Louder with Crowder with Colion Noir and Ben Stein: The election is rigged

Rush Limbaugh: Ever see a bigger bunch of uptight people?

AoSHQ: All of Hillary’s dirty tricks are coming out

Mark Steyn: Laws Are For The Little People