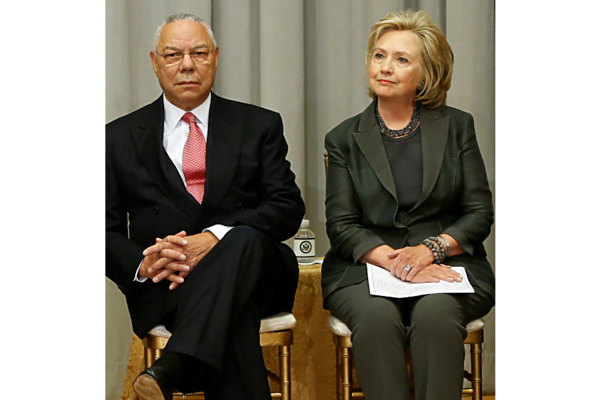 Hillary Clinton: Scapegoating the black guy
Someone should take a knee
Update: Colin Powell: “I would rather not have to vote for her“
DRUDGE REPORT: Hillary Clinton was told to stop lying about Colin Powell, and she kept right on lying…
These leaked Powell emails are not coming at a good time for Clinton. Clinton media allies are focused on Powell called Trump a disgrace. That is a distraction, it is well known Powell is not a Trump fan. The bigger story (and far more damaging story for Hillary Clinton) is how Powell warned Hillary repeatedly not to use him as an excuse for her email failures. Hillary’s response? Clinton kept lying about it.
Hillary Clinton just can’t tell the truth. When asked she does more than merely exaggerate, she lies.  And she does it pathologically.  And what her physical collapse shows is she will lie beyond convenience and will mislead the public every chance she gets.
And even when caught, Crooked Hillary lies again.
Blazing Cat Fur: Powell Email Leak
Lem’s Place: Pay To Play, The Clinton Way
Hillary Clinton’s Deplorable Dirty David Brock
Hot Air: Hillary has half the country fooled on health
Ed Morrissey: The Week: It’s not the cough. It’s the cover-up.
NY Post: Hillary collapse reveals absurdity of biased media coverage
DaTechGuy: The Lord’s Mysterious Ways: What a difference a week makes
RedState: Jason Chaffetz uncoveres new security violations by Hillary Clinton
Rush Limbaugh: Clinton steps in it, CBS cleans him up, Comey’s case against Clinton (America is the jury), what Colin Powell cares about

Instapundit: Hillary hates Obama for beating her in 2008, Hillary Deplorables (via Slate): New poll finds Hillary supporters pretty racist too, Embrace the healing power of ‘and’, Frog says scorpion mustn’t sting, Hillary lies finally begin to ad up, it is easier to lie when the press enables you (or in this case lies for you)

Hot Air: Colin Powell: Clinton is greedy and her husband is still d*cking bimbos (tell us what you really think General Powell)

Colin Powell: I would rather not have to vote for her

TOM: #DNC Leaks: The Benghazi-ISIS connection (Why Democrats Are Wrong) and Who is plotting terror attacks?

Republicans Know What's at the Heart of Nancy's Edict for Masks on the House Floor
Townhall
'Pro-terrorism must be the new WOKE': AOC referencing apartheid to trash Israel does NOT end well for her, like at all
Twitchy
Not Looking Good for Dems: Americans Deliver Brutally Honest Rejection of Kamala Harris
Redstate
CNN Mysteriously Drops Don Lemon's Show
PJ Media