9/11 and the NFL: Why we love Kate Upton (and many of us support the Seahawks too) 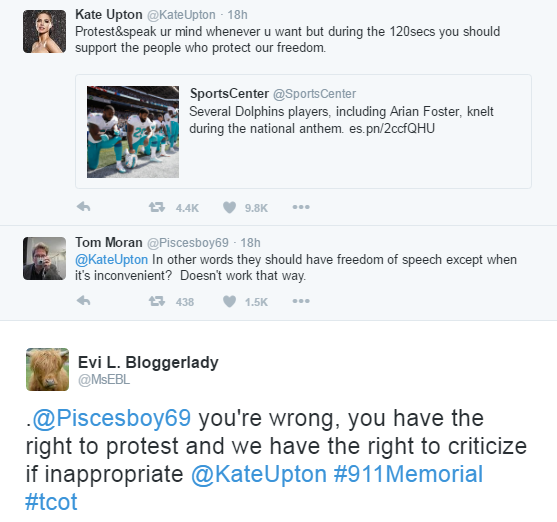 This kneeling was not just during the National Anthem, it was immediately following the 15th Anniversary 9/11 remembrance and moment of silence. @Piscesboy69 above is all about supporting “free speech” when he agrees with it, and silencing those who he disagrees with. 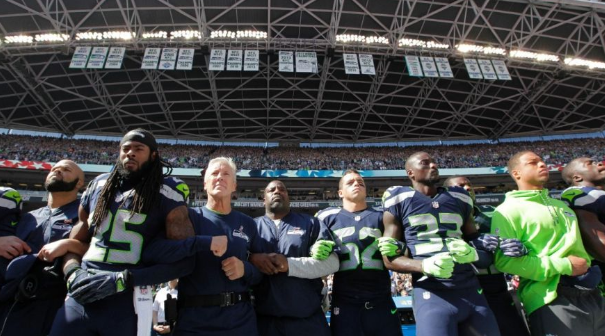 None of the Seahawks players took a knee. They decided as a team given the circumstances it would be inappropriate. The Seahawks linked arms to show unity. Jason Johnson at the Root called the Seahawks cowards for doing that. Jason Johnson is certainly entitled to his opinion (even though I disagree with it). Immediately follow a 9/11 event is not a place to grandstand. Of course players can call out for justice and speak out against police brutality, but at an event that is about hundreds of firefighters and cops who were killed (many of who were black too). Sorry, I am not supporting that.The Seahawks showed class in how they handled themselves yesterday. That is consistent with things Russell Wilson and Richard Sherman have said in the past:

But I also think that there’s a way to go about things, and there’s a way to do things. And I think the issue at hand needs to be addressed internally, and before we move on, because from personal experience, you know, you have living in the hood, living in the inner city, you deal with things, you deal with people dying. Dealt with a best friend getting killed … it was two 35-year-old black men. Wasn’t no police officer involved, wasn’t anybody else involved, and I didn’t hear anybody shouting “black lives matter” then … and I think that’s the point we need to get to is that we need to deal with our own internal issues before we move forward and start pointing fingers and start attacking other people. We need to solidify ourselves as people and deal with our issues, because I think as long as we have black-on-black crime and, you know, one black man killing another … if black lives matter, then it should matter all the time. You should never let somebody get killed — that’s somebody’s son, that’s somebody’s brother, that’s somebody’s friend. So you should always keep that in mind.

And there’s a lot of dealings with police officers right now, I don’t think all cops are bad. You know, I think there’s some great cops out there, who do everything in their power to uphold the badge and uphold the honor and protect the people in society. But there are bad cops, and I think that also needs to be addressed. I think the police officers we have right now — you know, some of it is being brought to light, because of video cameras, everybody has a camera phone. But these are things a lot of us have dealt with our whole lives. And I think right now is a perfect time to deal with it. The climate we’re in … everybody’s being more accepting, you know, so I think the ignorance should stop. I think people realize that, at the end of the day, we’re all human beings. So, you know, before we’re black, white, Asian, Polynesian, Latino — we’re humans. So, it’s up to us to stop it. Thank you.”

And the Seahawks ended up winning that game too.

Instapundit: Not an issue with the Seahawks (but as for the Cowboys, shame on the NFL and Goodell), Unity Demonstration, Kaepernick takes a knee

AoSHQ: Seahawks (although they did not go there as a team) and NFL exposed for what it is and seriously the NFL and Roger Goodell can go to hell

I concur with this: tell us what exactly you think should be done.  We all want justice.  Tell me specifically what you support and try to engage us in dialog. But merely saying you protest something, in a manner that alienates more people than it engages, becomes a non starter.