From nothing and conspiracy theories to pneumonia? What is really wrong with Hillary Clinton?

From her pickle jar ‘feats of strength’, to coughing fits, to pneumonia? She had a serious fall and possible stroke months ago that she has never come clean on. She used her health as an excuse for not remembering what happened with her emails with the FBI. While pneumonia is pretty serious in itself, why do I doubt what Hillary Clinton is really suffering from is actually just pneumonia?

.@realDonaldTrump on Hillary’s health: I hope she gets well, gets back on the trail & we’ll see her at the debate pic.twitter.com/1k8vXigpBv

Instapundit: Will Democrats go with Bad Touch Biden?, Battered Journalist Syndrome (they just can’t stop loving her), Great Journalistic Fail, If Hillary Can’t Make It Through A 9/11 Ceremony, how will she deal with a real 9/11?, So Hillary has pneumonia and embraces a child?, Rockin’ pneumonia?, Presidential, Radical Transparency? Good suggestion about transparency, but you lost me at “appears to stumble”, How not to win an election: sarcasm and pleading, Hillary cancels West Coast swing following health scare, and Spengler: Why Trump will win (Don’t dis the Deplorable vote) 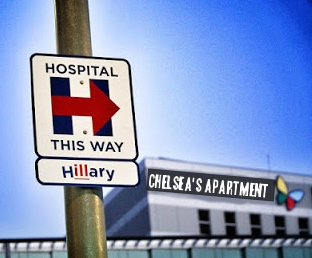 Yeah, Hillary is in a pickle

DRUDGE REPORT: Heat Street: What happens if Hillary drops out? 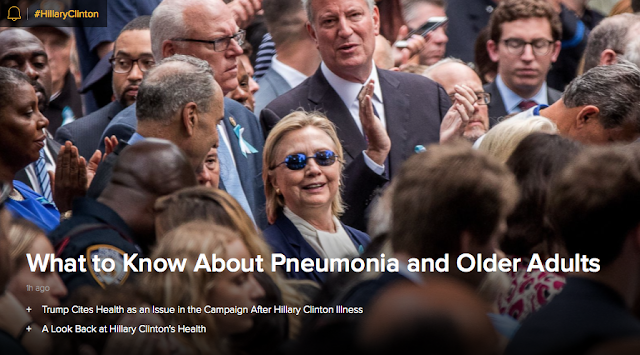 ABC News: What to Know About Pneumonia and Older Adults

Yes
Lem Levity: Hillary’s political fate may be decided later today, Epilepsy glasses? and Don Surber asks: Who replaces Hillary?
Hot Air: Politico acknowledges this has shook up the race, Trump campaign to be respectful and to release his medical records
Legal Insurrection: Washington Post makes the inadvertent case for Trump (she can get away with anything)
DaTechGuy: The last thing the GOP wants is Hillary dropping out of the race and the last time America elected a sick person as President was 1944 and Twitchy: Axelrod is calling Hillary unfit (be careful that could actually happen)
RedState: Press, you mad bro? and we have always been at war with pneumonia
Danger and Play: Complete Timeline of Hillary’s Health
Victory Girls: Hillary’s Health Serious Issue
Daily Wire: Pneumonia Confirmed
AoSHQ: Appropriate Art Pick 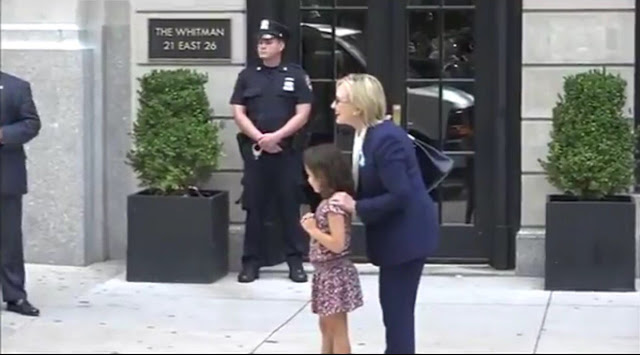 At the end of August, two weeks before Clinton was diagnosed with pneumonia, a debilitating bug was making the rounds among staff at her headquarters and campaign aides who travel with Clinton, a source tells PEOPLE.

At least half a dozen senior staff were felled, including campaign manager Robby Mook. Two top advisers even needed emergency medical treatment, the source says. One top adviser diagnosed at a Brooklyn urgent-care center with a respiratory infection was being treated with antibiotics in the days before Clinton’s diagnosis. Another top adviser was taken by ambulance to the ER by ambulance after collapsing from what turned out to be severe dehydration, the source said.

American Power Blog: Trump not downplaying Hillary health, but releasing his own records

Hogewash: Nothing to see here, move along… 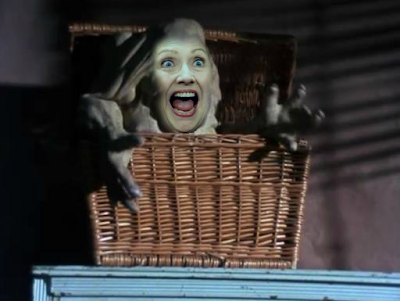 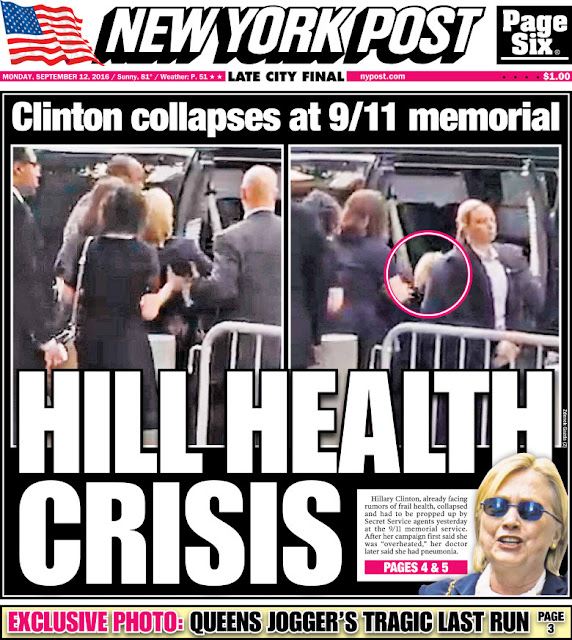 Rush Limbaugh: Democrats in full panic (something neurological with Hillary) and how Mrs. Clinton sees you

TOM: How sick is Hillary, Hillary and the Clinton News Network, The Objective Truth of @fmanjoo and the New York Times’ Partisan Bias, Never Trust A Bisexual

EBL: Hillary has a seizure on camera and Basket of Deplorable: Hillary and the Clinton News Network’s Wicker Trap