She Will Always Be My Crooked Hillary 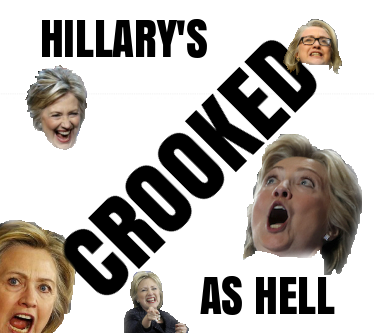 Instapundit: Crooked Is As Crooked Hillary Does

Hillary also claimed a lot of memory problems, leaving blogger Tamara Keel to write: “I have an Ivy League lawyer, wife of a former governor and president, who lived in the White House for eight damned years, then went on to be a senator and Secretary of State telling me she didn’t know about classified email and that work-related documents needed to be saved as part of the public record? Look, I don’t mind you bullshitting me a little bit, Hillary, but don’t you ever lie to me like I’m Montel Williams.”

You don’t have to be an Ivy League lawyer to recognize a coverup when you see one. This goes far beyond anything Richard Nixon did after Watergate. If the coverup is this big, what’s being covered up must be pretty bad, bad enough that they’re willing to blow lots of smoke rather than let us see the fire… This is where we are on Labor Day weekend, 2016.

That Hillary Clinton is (mostly) getting a pass from the mainstream media is amazing, but not all the media is going along with this. Mark Halperin said FBI Director James Comey was acting as “an arm of the Clinton Campaign. Mark Halperin brought up how material was possibly destroyed by Clinton’s team after it was requested by House Select Committee on Benghazi.

But not all of MSNBC is doing what Halperin is doing. RedState (hardly pro-Trump) noted that MSNBC “adjusted” a poll to give Hillary a 2 point lead (the poll in question was showing Trump with a 2 point lead). Why would MSNBC do that if Hillary was “winning”? A question which sort of answers itself doesn’t it.

EBL: Crooked Hillary Had A Big Fall
Lem’s Place: Clinton Foundation ignores law requiring it to disclose millions from foreign donors
Wombat: Twitchy: Don’t worry, Hillary behind in the polls, MSNBC has Clinton’s back and DaTechGuy: Where are all the other coughers?
Instapundit: Bill Clinton scored some lucrative gigs too!
Don Surber: Who’s scumier?
Share
Tweet
Register Login to Comment
TRENDING

It's Time to End the Republican Kabuki Theater
Stu Cvrk

Here's What's At Stake If Smith and Wesson Loses Its Case Against New Jersey
Townhall
Politico spin on what Biden & teachers unions are 'mounting a campaign' to do is shameless
Twitchy
'Antiracist' Doctor Finds Little Sympathy After Rant on White Woman Who Asked if She Was a Retail Clerk
Redstate
Insanity Wrap #208: The Morbid Truth About COVID-19 Deaths
PJ Media