Brock Turner and Corey Batey: Is there disparity in the criminal justice system? 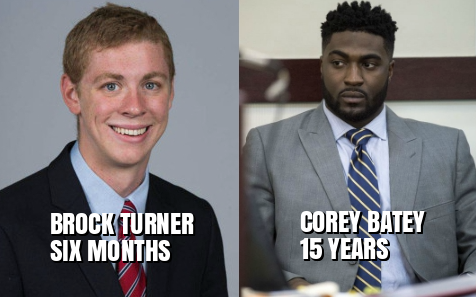 Brock Turner got six months for raping an unconscious female at Stanford (he got out of jail after 3 months for good behavior). Corey Bately on the right just got 15 years for raping an unconscious female student at Vanderbilt.
In the Turner case, it was a very drunk male with a unconscious female he raped. Here is the letter his victim read to the court. Turner still does not admit he raped anyone that night.
In the Batey case, there were four males who raped an unconscious female student and recorded it on their cell phones.  Beyond the rape, Batey also urinated on her face while saying: “That’s for 400 years of slavery you b—-.”
A male having sex with a woman who is unconscious is rape. But what Batey and his fellow participants did was far worse to the victim.  Batey apologized in court to the victim and also to Dr. Phil (claiming not having a father in his life contributed to this). Drunk or not, they were sober enough to operate a phone. 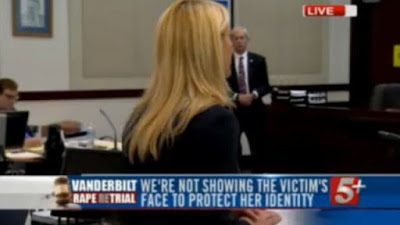 Four men gang raping an unconscious girl is the college nightmare Rolling Stone and Sabrina Rubin Erdley were desperately looking for. Too bad the perpetrators at Vanderbilt were black and the victim white–because that did not fit the narrative they really wanted, so Erdley and Rolling Stone found a fictional story instead (feminists have gone silent on that part of that story).
What Batey and his participant friends did warranted a severe sentence. But I can understand how people looking at this might think things would have been far different for Mr. Turner if he happened to be black. I am not suggesting these two crimes are equal (they are not), but still have to question how Turner gets out in 3 months and Batey gets 15 years.
And at Robert Stacy McCain pointed out in some of his posts below, what about the universities that turn a blind eye to all the alcohol being served to underaged students?  Is there any culpability for them in these events?
TOM: Occidental Professor @LisaWade declares Heterosexual men are predators, Update from the Patriarchy™, The Wounded Antelope Of The Herd and La Belle Dame sans Merci
Instapundit: But that does not advance the narrative: What about the men at Stanford who protected instead of preyed?
Share
Tweet
Register Login to Comment
TRENDING