Kareem Abdul-Jabbar: I defend your 1st Amendment right to be a chidey whiny scold...

Kareem Abdul-Jabbar, just like you are entitled to your opinion, I am entitled to mine. If it is wrong to try to shut up Kaepernick, it is just as wrong to shut up those who disagree with him. Personally, I doubt the sincerity of Colin Kaepernick’s protest.

Kareem, I do not want to see innocent Americans (of any race) shot by the cops. It is rare and when you objectively look at the facts, African Americans are not killed by cops in unusually higher percentages than other races. Still, any police shooting that shouldn’t happen is still a tragedy. There is also a perception that many blacks feel they are targeted more by cops.  Which reinforces the perception that targeting includes blacks being shot by the police.I also acknowledge that relationships between many urban African American communities and the police are poor–which does not help solve the Black-On-Black violence in many of these communities. That definitely needs to be worked on–for the benefit of cops and those communities.

If Colin Kaepernick really does care about racism in America and the interaction of police and African Americans as he contends, put his money where is mouth it. Why doesn’t he try to really improve the situation? Does sitting for the National Anthem help?Sorry, but I suspect this protest is more to do with his mediocre play and his own personal insecurities and the high likelihood of being cut than a sudden political awakening. I suspect Kaepernick is posturing. 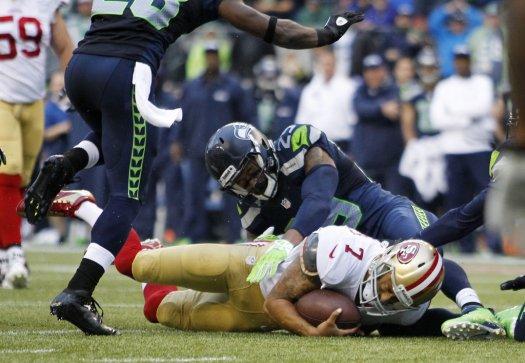 Colin Kaepernick is not standing end the end of this play, but he did hold onto the ball…

But I am biased, I can’t stand the 49ers. From watching Colin Kaepernick’s performance over the years, I have thought he is a head case who is not suited to be a premier quarter back in the NFL. I suspect, unless something changes dramatically, that Kaepernick’s career in the NFL may not last too much longer. Maybe it is a coaching thing and he will benefit being on a different team. Then again, even Harbaugh who was one of Kaepernick’s supporters, does not respect his protest.

I am, however, a huge 1st Amendment fan and supporter. I defend people to peacefully protest and Colin Kaepernick has that right. Even Jim Harbaugh (who I never liked either) and who was one of Kaepernick’s biggest supporters, does not respect his protest. 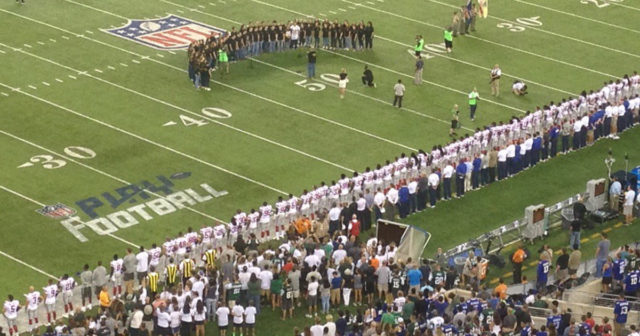 Giants respond to Kaepernick
As for the NFL and its cowardly decision to not allow Dallas to support its fallen police officers–did I mention I am not a fan of Roger Goodell?  Goodell is is a coward.

TOM: ISIS buried thousands in mass graves. Kareem Abdul Jabbar is Muslim. While I generally like Kareem’s take on things, why doesn’t he spend more time condemning such atrocities done in the name of his faith, such as ISIS?  I am sure he rejects it, but his criticism of that is rather mooted compared to him chiding us about criticizing Kaepernick.  He has brought up the KKK and the Crusades as examples of hypocrisy, or makes a rather strained connection on ISIS and Trump, but why not more focus on things happening now?

CNN was on board with Kaepernick until he had the temerity to go after Hillary Clinton! CNN can’t support Kaepernick comparing Trump with Clinton.

Did Team Biden Even Consider the Optics of This Moment During Florida Trip?
Townhall
Tweeter risks wrath of some of America's most privileged lib journos in order to expose their efforts to hide their backgrounds from the public; UPDATED
Twitchy
John Fetterman Gets Pummeled by an Unexpected Source
Redstate
The Morning Briefing: Can a Republican Majority Rein In the Lawless DOJ?
PJ Media