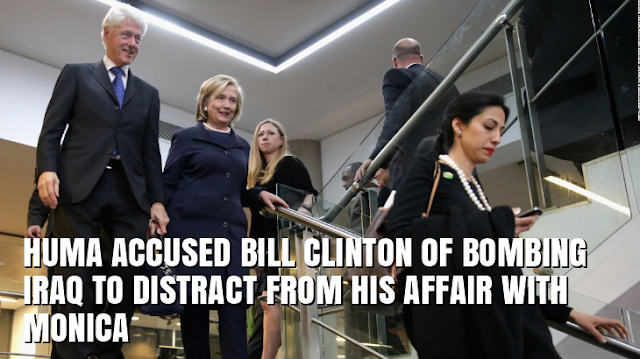 An article in the Muslim journal where Huma Abedin was assistant editor claimed Bill Clinton bombed Saddam Hussein to deflect from his Monica Lewinsky affair.

The claim made made in an article published in the Journal of Muslim Minority Affairs, where Abedin was a member of the editorial board – the group of people who decide what is published in the academic journal.

That magazine, while Huma worked there as an editor, opposed woman’s rights and blamed the US for the 9/11 attacks. And Hillary was exchanging emails with her on an unprotected unsecured server.

EBL: The Mystery of Huma Abedin
What?  One third of Hillary emails to Huma are so sensitive they are 100% redacted from Congress!
Lem Levity: Tech firm for Crooked Hillary brags about blocking FBI, Judge orders Clinton emails released by September 13 and WaPo catching up with Hillary’s Hidden Emails
Rush Limbaugh: Do you think Hillary would have helped in Benghazi if the victims donated to her Foundation?

AoSHQ: Bill Clinton allegedly cheated on his wife (was that stain on Monica’s blue dress alleged too)