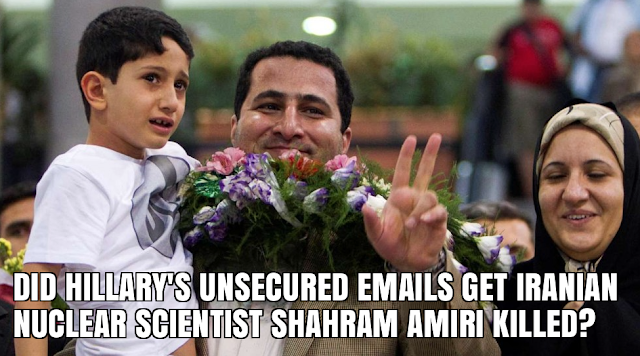 Hillary can make up a lie about a film to explain why Shahram Amiri was killed…
Not all Muslim lives matter (as much) to Hillary Clinton
DRUDGE REPORT: Washington Examiner: Hillary Clinton recklessly discussed Shaharam Amiri on her email
Hillary Clinton used her private email server to discuss Shahram Amiri’s case, which she had to know was a very serious topic and was absolutely something to keep secret. Iran’s government just executed Mr. Amiri for spying.
Hillary Clinton referred to Shahram Amiri as “our friend” but with friends like Hillary who needs enemies? As Hillary Clinton is apt to say, “What difference does it make?” What matters is her winning, and if she broke a few eggs on the way, oh well, that is how you make a Hillary omelette.
Instapundit: Loose lips sink ships (But so long as she’s elected, meh…)
Lem’s Place: Andrew McCarthy: Obama’s cash payments to Iran broke the law
American Thinker: Did Hillary Clinton emails doom Iranian nuclear scientist to death?
EBL: You know who is unfit to be President: Obama and Kerry’s $400 million ransom payment to the Iranians and Ben Watson: Planned Parenthood was created to ‘Exterminate Blacks’ and you know ‘It’s working’
Share
Tweet
Register Login to Comment
TRENDING

Canadian Pastor Dragged Off by SWAT Team Out on Bail Has a Warning for Americans
Townhall
WHOA: Obama bro and 'van driver' extraordinaire Tommy Vietor all but CONFIRMS Israel's claims about Hamas being in AP building
Twitchy
Evil Republican Governors Move to Cancel Enhanced UI, Then One Evil Democrat Joins the Party
Redstate
OUTRAGEOUS: Space Force Unit C.O. Relieved of Duty for Criticizing Marxism in the Military
PJ Media