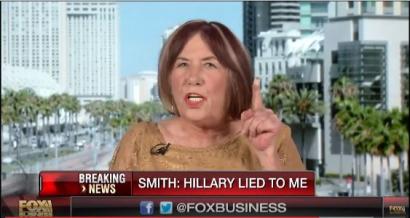 Newsbusters: Media Bias: ABC censors Patricia Smith
Hot Air: Why wasn’t Pat Smith treated with the same media reverence as the Kahns?
Turns out Crooked Hillary and her media crony Chris Matthews have also treated a Gold Star mother poorly. Let’s call them out on that. Media hypocrisy is on full display.
Pat Smith: “I was treated like dirt by Hillary Clinton”

As political media battles go, Trump got by far the worst of it (at least so far). While hardly vicious in his response (compared to how the hostile media painted it), it was poorly handled.  He should have anticipated the coordinated media attack that was coming after Kahn’s appearance at the DNC, especially when Trump was scheduled to go on with Clinton’s GoTo Guy George Stephanopoulos. Did the Trump campaign not have a sit down with the candidate to go over how Stephanopoulos would likely try to set him up? If not, shame on him. You can bet Stephanopoulos and his team planned it out.

Hopefully it is a lesson learned. Trump’s foolishness in being bested by Snakey Stephanopoulos, however, does not excuse the utter cravenness of Crooked Hillary and how she personally attacked Pat Smith and called her a liar. If they are going to call out Trump, then shouldn’t we call out Hillary Clinton and Chris Matthews and the others who attacked Pat Smith?

We should all recognize that Gold Star parents deserve to be treated differently (and far more deferentially) than other political pundits. That does not mean we have to accept the Kizhr Kahn’s policy and political recommendations. Mr. Kahn has an interest in this topic since he is a lawyer who promotes Muslim immigration from Pakistan. We can absolutely resist that.
We can all recognize the sacrifice of Captain Kahn, while also stating we do not want any more murderous terrorists attacks like 9/11, Boston Marathon, San Bernardino, or Orlando. And if safety means changing immigration policies, what is so wrong with that?  The U.S. Constitution does not confer rights to non-citizens outside the United States. There is no fundamental right to immigrate here–it is a privilege.
Rush Limbaugh: An Ideological Prism Would Help Trump Avoid The Kahn Controversy (Trump needs maintain healthy caution around partisan media trolls like GoTo Geroge Stephanopoulos) and the media think they have Trump now

Hot Air: Washington Examiner: Byron York: Khizr Kahn, Donald Trump, and the debate over Muslim immigration (the return of Cindy Sheehan, but ignore Pat Smith), Gold Star Families to Trump: Apologize (and when you are in a hole, stop digging), Cory Lewandowski: It Trump were president Capt. Kahn would still be alive

Instapundit: Why Trump’s message resonates with so many voters, While Trump battles the media, Hillary keeps lying, PJ Media: Where was Hillary Clinton when Capt. Kahn died?, Howard Kurtz: Austin Bay is right, Yes, the media is running with Hillary on the argument “Trump is dangerous” and expect it to continue through November, Goat Rodeo (Donald, you fell for the trolling),Hillary says Benghazi mother “may not recall what [Hillary] told them about the video”, Whose Constitution? Byron York on Khizr Kahn and Donald Trump,

Clean House in 2025
Townhall
Group has liberated land to be a city for colonized people only; No rent, no kkkops, rona or colonizers allowed
Twitchy
New Poll on MLB Moving All-Star Game Shows Warning Signs for Democrats in More Ways Than One
Redstate
8 Righteous Reasons Why Derek Chauvin Deserves a New Trial –– and That Juror's Shirt Is Only One of Them
PJ Media