A Tale of Two Media Narratives and a trap for the unwary: Grieving Parents at the RNC and DNC

I sympathize with these grieving parents, and I thank them both for their sons’ respective services
Of course, the media pretends that Patricia Smith (who was actively lied to by Hillary Clinton after the death of Sean Smith in Benghazi) does not exist, focusing all their attention on Kihzr and Ghazala Kahn and challenging Trump on his proposed ban on Muslim immigration.
Trump has nuanced that response from earlier in the campaign.  What he has said he would temporarily ban immigration from countries with links to terrorism (like Syria).  I am opposed to bringing in Syrians, Afghanis and Iraqis right now too (other than targeted Christians and other religious minorities or those individuals who demonstrated loyalty to the United States and who are targeted by terrorists for that loyalty).
The media (it seems almost coordinated when you have the New York Times, ABC and Megyn Kelly  at Fox–but who is auditioning for a new job at CNN or the networks, all following the same argument) that Trump’s immigration policies would have denied us a hero like Captain Human Kahn.  Well that is a bit of a stretch in hindsight, but the same argument could be made that such a ban would have potentially “denied us” terrorists who committed the attacks at the Boston Marathon, San Bernardino, Orlando and even possibly the events on 9/11.  Two can play this game.
The smart thing was for Trump to see these attacks by the media as what they are, political traps set up by a hostile partisan media. There is nothing gained in attacking the Kahns. They lost a son who was a hero in combat, a Muslim American solider killed by fanatical Muslims terrorists.  They deserve our sympathy and thanks (just like Patricia Smith does). The Kahns are pawns in this media game.
This was a very poor political response by Trump. Why Donald Trump would go on a show run by a completely biased and dishonest Hillary Clinton supporter and Democrat operative like George Stephanopoulos in the first place is foolhardy (Hillary refuses to even give press conferences she can’t completely control). If you are going to put yourself in such a place, which Mr. Trump voluntarily did, why not pivot away from the grieving Kahns and challenge Clinton Foundation Donor Stephanopoulos to ask Hillary Clinton similar questions about Patricia Smith and Sean Smith?  Trump should be pointing out the double standard and hypocrisy of these media tools ever chance he gets.
And no Mr. Trump, you have not sacrificed like Mrs. Smith and the Kahns have.  Don’t even try to justify that–nor do you ever want to–No parent ever wants to be part of that club. Of course Hillary Clinton has not sacrificed either (I saw Anderson Cooper try to argue at the DNC while on the post speech debate panel that Hillary Clinton sacrificed by taking a low paying civil service job her whole career, apparently missing she is worth more than $250 million today).  And unlike Trump, Hillary Clinton was actively involved in putting Sean Smith and Captain Kahn in harms way. 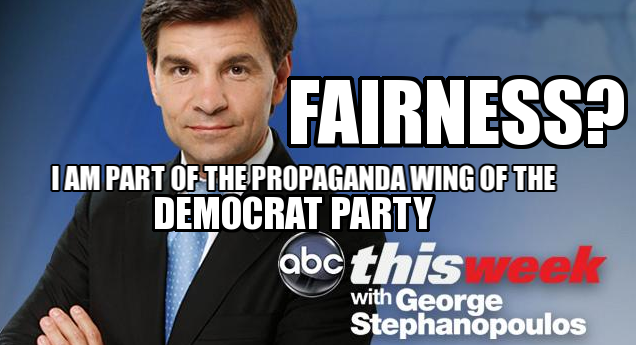 Yes Mr. Trump, you were set up by Clinton’s GoTo George.
As you point out, Stephanopoulos is a liar.
And you walked into this trap.

AoSHQ: There is a big difference going after General Allen and the parents of a fallen soldier (Try not to make Hillary’s mission easier)