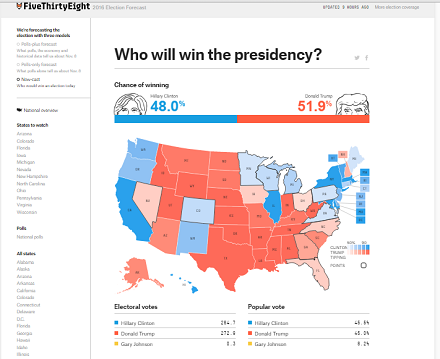 This is not what Team Hillary was expecting post Democrat National Convention. But it is not all that surprising either given Bernie Sanders supporters feeling cheated. That bitterness by Bernie supporters is justified given  without Dirty Debbie’s DNC shenanigans and Crooked Hillary’s vote rigging, Sanders would have won over Hillary Rotten Clinton in a landslide.
As DaTechGuy notes in his update, Nate has subsequently revised this from this morning to show a slight lead for Hillary. Not really though. If you add up the electoral votes, it breaks out to 269 for Trump, 269 for Hillary.  In that circumstance doesn’t the House of Representatives gets to decide Trump or Hillary?  Under that protocol, the representatives votes by states, one vote per state, so assuming Representatives voted as their states voted (red or blue) Trump would win.
Can you imagine the shenanigans that would go on if this goes to the House? It would be crazier than Bush Gore. 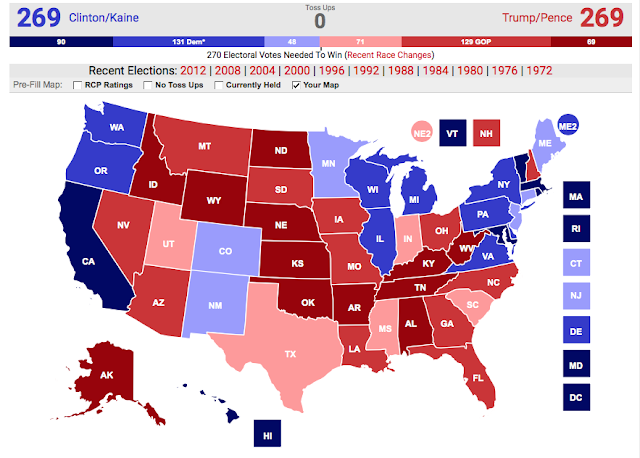 This outcome map is definitely in the realm of possible
Instapundit: Johnson Weld is definitely not libertarian (classic social liberal-fiscal conservative ticket–Merrick Garland and Stephen Breyer are NOT libertarian justices), Jonah Goldberg: My God, She’s running as Hillary Clinton!, Don’t take polling too much to heart yet
Share
Tweet
Register Login to Comment
TRENDING