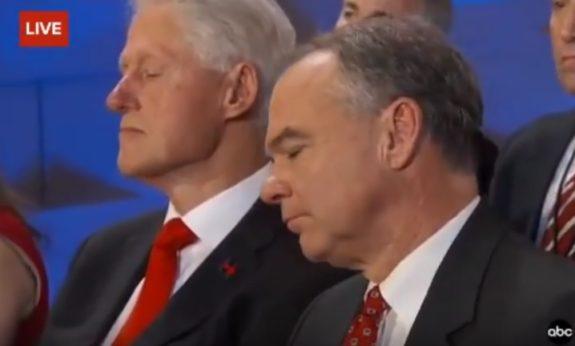 Gateway Pundit: Powerful like Ambien, she not only took out a frail Bill Clinton but Tim Kaine too…

I almost cannot believe she is this bad at this. No wonder it took her 9,763 years and the lifeblood of 34 virgins to get her to this point.

I know Bill Clinton has a heart condition, and it did start a bit late, but you would think they could give him and Tim Kaine a doppio espresso before the speech started. Leon Wolf asks which candidate’s speech will sound better a month from now. Neither.
With the exception of a few amazing speeches (Reagan, Churchill, etc.), I rarely spend my free time listening to speeches. Other than looking to lift sound bites for attack media, I doubt few people will. And as Leon noted, it was poorly executed. The answer is no one will care about these speeches a month from now, we will be into the debate cycle then and that is what will matter.

Trump is trying to win with an emotional message. Hillary’s message is more everything is great and I am logically the best choice. We all knew this was coming, Hillary focusing on Donald Trump’s Twitter temperament and being responsible for nuclear codes. That is going to be a major branding theme in the Democrats argument of why Trump should not be president.

The problems for Hillary is Trump is a pretty good tweeter. Trump did a flurry of tweets following Hillary’s speech, but unfortunately for Hillary, they were like a flurry of punches that found their mark.

Hillary’s wars in the Middle East have unleashed destruction, terrorism and ISIS across the world.

Hillary’s vision is a borderless world where working people have no power, no jobs, no safety.

When it comes to playing social media, Hillary is no where near as good at this. Her speech last night would have been better if it were half the time.

The ratings for this are going to be amazing because most of America has already fallen asleep in front of the television.

I could swear Charlie Brown’s teacher said many of the same things.

Blazing Cat Fur: Maybe the whirl of white sound machines droning out Bernie Protesters caused Bill Clinton and Tim Kaine to lose consciousness?  Beyond the speech being white noise itself.

Every time the crowd starts chanting Hillary Hillary, they do so to shout out Bernie supporters. #DemConvention#DemsInPhilly

EBL: The Full Rodham: Hillary gets ready for her big speech, Trump uses Obama and Clinton’s own statements against them, trolling them all day and Ivanka and Chelsea are friends, but they aren’t treated the same by the media

Instapundit: Is the election over? , Sanders Supporters chasing Hillary Cospirator David Brock through the Wells Fargo Center? (I wish there was video for this), Andrew McCarthy: Hillary commits felonies and blames Trump for treason?