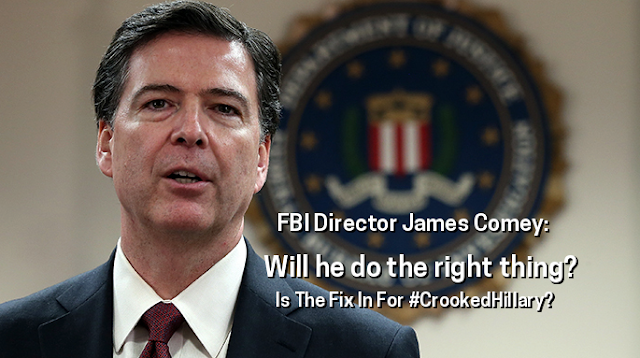 Anyone else would face immediate firing/suspension, loss of security clearances and prosecution for something like this. Yes, the fix was in all along.

Instapundit: Why do so many distrust Hillary Clinton?, Huma Abedin admits Hillary burned her schedules, Hillary Hindsight (yeah sure), and Trump’s Defeat?

AoSHQ: This is a cover up and You owe them nothing

TOM: The Children of Alinsky

Instapundit: Roger Simon: Did Comey destroy Hillary by not inditing her?,  Crooked Hillary: That will leave a mark,  No reasonable AG meets with a suspect’s spouse, While Comey’s remarks were devastating for Hillary-they won’t be spun that way, Austin Bay: Comey is a Coward, Rule of Law Is Dead, Extremely Careless?, Wargaming the Electoral College

Rush Limbaugh: What does this timing mean?, Don’t be depressed, it is up to Trump now to make the case to the American people, Why does lack of intent matter in the eyes of the law?

National Review: FBI rewrites the law to let Hillary off the hook, Hillary’s Banana Republic, Washington’s Hollow Men, to get a security clearance now Hillary has to get elected

EBL: Tuna vs. Seagull and Lying Loretta and #CrookedHillary

Hogewash: The Fix Was In