By evilbloggerlady | Jun 15, 2016 9:44 AM ET
Share Tweet
Share
Tweet
This Is CNN: Hey let’s talk hypocrisy Anderson Cooper. Anderson Cooper did not publicly admit he was gay until 2012 and he was 48 years old: Does that make him a coward?  Barack Obama defined marriage as between one man and one woman in 2008 and said so, so why is Anderson Cooper not grilling him?  Here’s a line of attack for you Anderson: How about Hillary Clinton taking millions from countries that are openly homophobic (you know Anderson, places that still execute people for being homosexual). 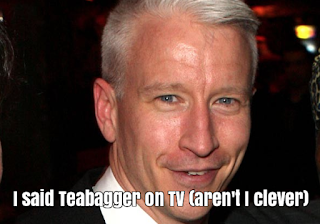 Hey Anderson: Why don’t you call Pam Bondi a tea bagger while you are at it.
This sort of seeking division by the left is what frosts me. This is Anderson Cooper trying to show off  and use his position at CNN to do it.  And we wonder why people don’t trust the media anymore. He has to attack Republicans and this is not about doing a story on the shooter (really, did Pam Bondi contribute in anyway to this attack) but to promote Cooper’s own political agenda and bias.  They don’t even try to hide it anymore.
Hot Air: Anderson Cooper calls Pam Bondi a hypocrite because she did not tweet about gay pride month before?

Mark Steyn: Party at the End of the World

TOM: Why is @Nero being ignored by mainstream media?

Commentary: The shame of Anderson Cooper