Rape Culture At Elite Universities: It has been a problem for a while... 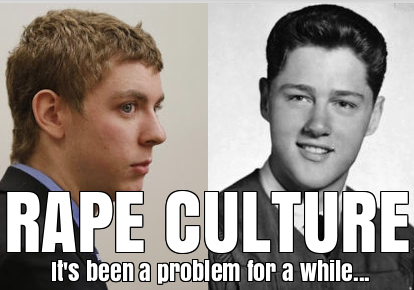 Bill Clinton has a long history of sexual abuse accusations,
going back to college and while at Oxford

Eileen Wellstone, an English woman who said Mr. Clinton sexually assaulted her after she met him at a pub near Oxford University where Mr. Clinton was a student in 1969.

In 1972, a 22-year-old woman told campus police at Yale University that she was sexually assaulted by Clinton, a law student at the college. No charges were filed, but retired campus policemen contacted by Capitol Hill Blue confirmed the incident.

In 1974, a female student at the University of Arkansas complained that then-law school instructor Bill Clinton tried to prevent her from leaving his office during a conference. She said he groped her and forced his hand inside her blouse. She complained to her faculty advisor who confronted Clinton, but Clinton claimed the student ”came on” to him. The student left the school shortly after the incident. Reached at her home in Texas, the former student confirmed the incident, but declined to go on the record with her account. Several former students at the University have confirmed the incident in confidential interviews and said there were other reports of Clinton attempting to force himself on female students.

When it involved Bill Clinton, don’t they say what happens in Oxford (or anywhere else) stays there?

I was not impressed with Brock Turner’s letter to the court, which was completely lacking in remorse for his victim, and claimed he was a victim of “party culture.” Brock’s father’s letter wasn’t much better.  But it’s not like Bill Clinton has expressed much remorse for his past either.  Apparently that party culture Brock experienced by Stanford, follows a lot of alumni when they move on from these elite schools to Washington D.C.  If you never face the consequences of your past acts, you never have to change.

Brock Turner just wasn’t connected enough. Had he had a girlfriend like Hillary Rodham Clinton running interference for him, he might have made a hell of a Democrat. His dad started a legal defense fund (hey, it’s not like he denied a gay wedding a cake).
Instapundit: 20 Minutes of Action, Punching Back Twice As Hard At Yale, Giving up Western Civilization at Yale and Stanford, no one seems too bent out of shape when migrants rape (Brock should have claimed he was a Syrian migrant), turns out half of college athletes are not rapists (they must have mistaken them for members of congress), and how about those UN Peacekeepers Rapists!

TOM: La Bell Dame sans Merci and The Wounded Antelope of the Herd, Feminist Fantasies, Anatomy of Rage, Is there hope for Feminists, The Personal is Political, and Social Justice and the End of Fun, Smitty: She used to like Tea