Promoting violence in American politics is not acceptable

Violence in American politics is not unheard of but fortunately it tends to be rare.  It has reared its ugly head since the founding of the Republic and was a factor in early part of the 20th century, in the 1930s and 1960s (arguably it was especially a factor in the 1860s). But leaving the Civil War out of this and Jim Crow intimidation directed against African Americans in the South until the 1960s, violence as a means of achieving political aims in this country has never been wide spread and has been routinely rejected by voters and politicians of both major parties. We have rule of law.When Trump some of his followers to lash out at protesters, it was wrong.  That Trump supporter who sucker punched the black protester at the Trump rally in North Carolina was arrested. Rightly so.

When the left had its riots in Costa Mesa and San Jose, that was wrong too.

No Neil, people absolutely do not deserve to be beaten for supporting Donald Trump.
[Neil says I misrepresented him with this.  I am only criticizing Neil for his tweet above.  He says he was not promoting violence against Trump supporters, but it certainly looks like he was ok with it. No one “deserves to be beaten” for merely supporting a candidate]

Vox editor Emmett Rensin was suspended from Vox for promoting (or justifying) violence against Trump supporters. RedState’s former editor and founder Erick Erickson called out to Hillary Clinton to condemn what happened in San Jose.  This sort of illegal behavior is a legacy of Barack Obama’s “fundamentally transformed” America, and we need not encourage more of it.  I cannot believe a RedState moderator is going where Vox editor Emmett Rensin went.

And while I do not support violence at Trump events (from anyone), Trump supporters generally do not go to Hillary and Bernie events and try to cause trouble.  Everyone has a right to protest at political events (to the extent it is public and not a private event) but you have to protest peacefully. 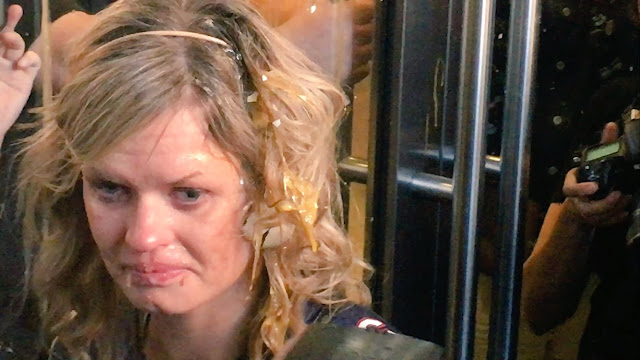 No one deserves to be assaulted for peacefully exercising their politics in America
Ironically it is stuff like this that may very well get Trump elected.  So to those on the left and on the fringe edge of the #NeverTrump movement, be careful what you wish for.

Instapundit: Scott Adams is endorsing Hillary Clinton so he doesn’t get killed and did the left think they would have a monopoly on identity politics forever?

DaTechGuy: What is missing from this Esquire piece?

RedState: GOP going the way of the Whigs and Ben Howe denounces violence by lefties against Trump supporters