#CrookedHillary: No one believes her, no one likes her... 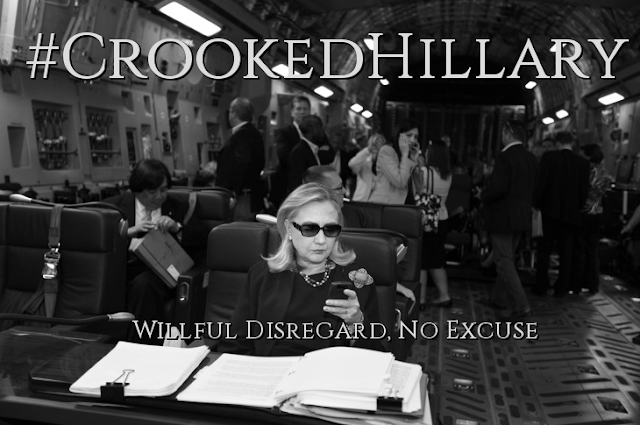 Know Your Meme
Washington Post: Inexcusable, willful disregard of the rules by Hillary Clinton
This is again getting bad for Hillary Clinton. If she was a Republican, Hillary Clinton would have been indicted already. This is increasingly becoming a problem that Barack Obama and his administration cannot cover up. Obama must be kicking himself for not giving Biden the green light.
Obama and Lynch will do what he can to cover for her, because the idea of Donald Trump (and more importantly the GOP) taking over the White House would likely result in the wiping out of a lot of Obama’s legacy. But there is only so much cover Obama can give, before it backfires and threatens to take him down with her. If the Trump Sanders debate goes forward, it makes Hillary look weaker and vulnerable. If she looks like she is going to lose anyway, or would be a weaker candidate than Sanders, why would Democrats stick their necks out for her?  They might as well take their chances with Bernie. And let’s face it, Obama does not like the Clintons.
Democrats are also concerned that the moniker #CrookedHillary might stick.
Instapundit: Observer: Email Gate just crippled Hillary Express and State Department’s top cop imperils Hillary Clinton campaign
When Hillary has lost Andrea Mitchell…

Rush Limbaugh: Mrs. Clinton’s promise to dissolve the border in 100 days if she’s elected and Drive Bys in distress over devastating report about Hillary Clinton

AoSHQ: Even Andrea Mitchell calling BS on Hillary, One is worse, and  a Quick Apology

Wombat:  Weasel Zippers: Hillary has the lumbersexual and syphilis vote

Conservative Treehouse: A Trump Sanders debate unprecedented and Hillary’s worst nightmare (well not as bad as being indicted, but it makes that outcome more likely)