Well look on the bright side: This is the likely Democrat Party nominee for President of the United States 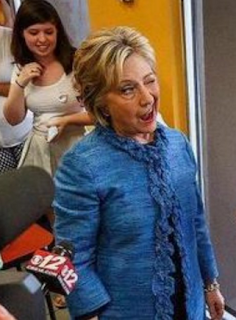 This has been a wild week. But before we panic over the robot take over of our society, let’s take a deep breath and remember it isn’t over yet.  Nikki Haley is endorsing Ted Cruz now. Rather than asking for “earth and water,” Mitch McConnell and Ted Cruz should be working together on how to save conservatism. Ok, I am heading into implausible science fiction now…

There is still hope. We are not going to lose the House. I doubt we lose the Senate–or if we do we will be back to a virtual tie again. If Hillary or Trump win the White House, I doubt either of them would be as effective as Obama (and Obama was not that effective once he lost his majority control of House and Senate).

Try unplugging her, wait 30 seconds and then plug her back in. Should reset her. pic.twitter.com/wDKAhyApsK


Instapundit: Super Delegates to Hillary’s Rescue, Dems gave us Trump, It’s Over, Part II, He carries it well, Isn’t this what the GOP said it wanted for years? and Trump is right: China is beating us! Has anyone told notorious robophobe Matt Yglesias?

EBL: #TrumpTuesday: Resistance is futile,  Donald Trump: Beware the Ides of March (or July as the case may be), How do you solve a problem like the Donald?, Marco Rubio, Beware The Ides of March, and Jonah Goldberg: How I stopped worrying and learned to love the Donald
Rush Limbaugh: Obama is not serious about Garland, Schumer took out Rubio and Kasich: The GOPe’s last best hope
Wombat: Mark Steyn: Of Trains and Trump and JWF: General Election Strategy
AoSHQ: This is not a good idea (if you want to oppose Trump, let Cruz have the chance to legitimately win–that is your only option right now)
Share
Tweet
Register Login to Comment
TRENDING

Johns Hopkins Doctor Dismisses Walensky Fear-Mongering: 'Most Of The Country Is At Herd Immunity'
Townhall
Hot take: Privileged liberal white males should buy guns, drop them off at minority community centers, and boom, gun control
Twitchy
A Major Biden Administration Scandal Is Brewing
Redstate
Eight Lovely AR-15 Facts (#7 Is the Best) You Need to Argue With a Lib
PJ Media