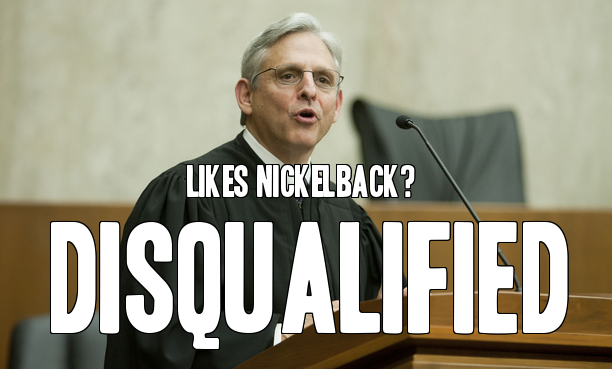 Allen West: Wait till you see who they want to replace Scalia with

Any candidate who likes Nickelback cannot be trusted!
Ted Cruz and Donald Trump have been falsely accused of allegiance to this despicable band, but it is well know the Obama Administration is full of Nickelheads and Merrick Garland is part of this cabal.
Instapundit: Not good on civil liberties, Garland supported handgun ban in DC (how Nickelback of him), Playing it safe,  Obama to announce his Supreme Court pick and Will Trump have his Altamont?

Rush Limbaugh: Obama is not serious about Garland, Schumer took out Rubio and Kasich: The GOPe’s last best hope

This pick is intended to drive a wedge into Republicans (do they take a “centrist” who is 180 degrees opposite of Scalia on gun rights) or wait for a Trump or Hillary pick?  If he goes down, they use it as an issue in the election. If he goes through, Republicans are demoralized. I do not think it much of a surprise.  Still, there is really no answer other than this:

Where Does Ted Cruz Go to Get His Apology?
Bonchie