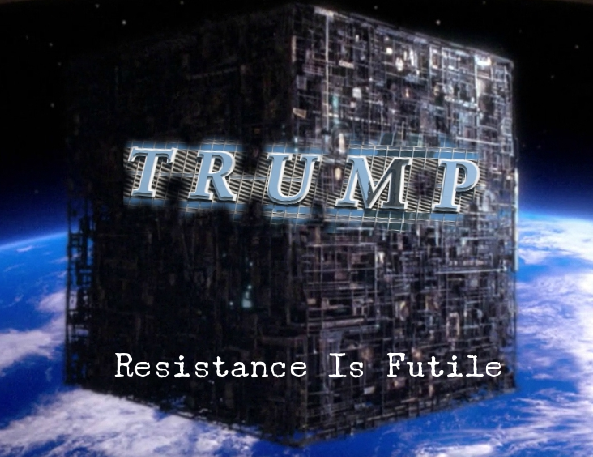 Newt Gingrich (who is obviously part of the Borg): Trump cannot be denied

Instapundit: Why Rubio is out, Republican voters feel betrayed by GOP, Preparing for the post apocalyptic conservative movement and the reckoning (2008)

Actually I do not think resistance is futile, but I was prompted to do this given Jonah Goldberg’s tweet below:

.@JonahNRO so long this is not your view, I figure there’s a chance #TrumpTuesday #ResistanceIsFutile @AceofSpadesHQ pic.twitter.com/9m00CT4EQ2

I do not believe a plurality translates into an automatic nomination—although if Trump starts landing more than 50% of the vote that is a whole different thing. At that point, he may even come into the convention with enough delegates to clinch it.

But right now with Trump taking Florida, Kasich fairly strong in Ohio in exit polls and early results (which like Florida is winner take all), and presumably Cruz competitive elsewhere–it is looking like there is a possibility of a contested convention.

Limbaugh predicted this: Cruz urged to apologize to Mitch McConnell (can’t they just hug it out). Exit polls show voters are really angry with the GOPe. So any brokered convention will be a disaster if they think they will just shove an establishment guy in. That means the Democrats will almost certainly win the general.

If John Podhoretz can resist, so can you!

EBL: Donald Trump: Beware the Ides of March (or July as the case may be), How do you solve a problem like the Donald?, Marco Rubio, Beware The Ides of March, and Jonah Goldberg: How I stopped worrying and learned to love the Donald

AoSHQ: It is all but over if Trump wins big

No surprise here: So the GOPe would still rather Trump win than endorse Cruz? @AceofSpadesHQ @instapundit @jtLOL https://t.co/whWNLOPHMA

Rush Limbaugh: Wise Men?, Watch out for Jeb, and hanging their hopes on Kasich

DaTechGuy: Baldilocks: Looking for saviors in all the wrong places

Ides of March: How it changed the world

From Raspail over at AceHQ: "Kasich seems like that weird guy in the rest room who pees with his hands on his hips."https://t.co/rZ7lNIyjST

DRUDGE REPORT: Other than Ohio, looks like big night for Trump  Kasich winning in Ohio ends up helping Trump and one of Ace’s commentators describes Kasich pretty well

Bill Maher: Liberals Are the Fun Suckers Now
Townhall
Beto O'Rourke trips over Gov. Abbott's 'death warrant for Texans' on way to big rally against voter suppression
Twitchy
Here Is Why the Democrats Are Totally Panicked About the Arizona Audit
Redstate
Yes, Biden Is Swindling Americans: White House Staffer Lets the Cat Out of the Bag
PJ Media