Is Kasich next to endorse Donald Trump? 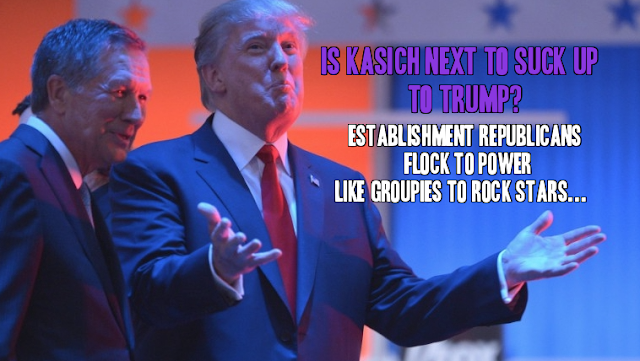 All the signs are there. Kasich must be thinking he wants to be Trump’s favorite. He has no chance on his own and Christie, while he would take vice president, is probably wanting the Attorney General spot.  Kasich has the potential to deliver Ohio to Trump.  Of course it must be a wee bit disconcerting to Kasich that Trump is leading him in Ohio. When you have Kasich predicting Trump is going to run the table on Super Tuesday, something seems to be up.  Kasich is signaling he will put out for The Donald if he gets picked to go to the prom with him.

These Establishment Republicans love to suck up. I find Christie and Kasich especially annoying. While I have my profound doubts about Donald Trump, it is those two who give me a lot of pause in this race. I can’t stand either one of them. Although they are not as bad as Lindsay Graham, who is a  scheming palace eunuch of the worse sort.

If you are a big Trump supporter and really think he is the best choice out there, fair enough. I disagree (Ace gives an excellent reason here and there will be an onslaught), but at least you are sincere about it. But the cynical nature of these tools who trashed Trump until they decided it was in their best interest to support him are what I find revealing.

Camp of the Saints: On baiting the worse angels of our nature: #Trump2016

Mark Steyn: Getting It and Nitwits of the Round Table