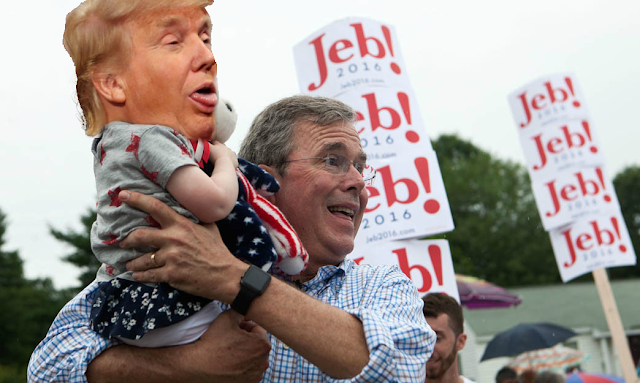 Stephen Hayes: How Jeb Cleared The Way For Trump

My apologies to Robert Lewis Stevenson, but Trump is Jeb!‘s inner id released. And while I am not wild about Trump, I prefer him by far to Jeb!

When it comes to Jeb Bush, is the problem Mike Murphy, their campaign, or perhaps just Jeb!

Meanwhile Jeb!, in his own spiteful petty beta way, continues to try to destroy Marco Rubio. I was disgusted by what Marco did with the Gang of Eight, he should have begged forgiveness for that idiotic decision, but Marco is still a better candidate on every metric than Jeb!, Kasich or Christie.

National Review continues to waste time trying to take on Trump directly while real conservative candidates like Ted Cruz are taken out by the GOPe. Even the special  NR “Gentleman’s Only” pictorial spread, as sassy and sexy as it is, won’t help destroy Trump. If anything NR’s efforts are probably helping Trump.

If you think the strategy to taking down Trump is to let the race be a match up of Jeb! or Kasich…that’s insane (unless you really want Trump to be the nominee). Of course, when you recognize there is so much money to be made by campaign advisors spending Jeb Bush’s campaign money, well you can probably guess Jeb! is not getting exactly unbiased internal advice. Ross Douthat has a different suggestion…which is worth paying attention to regardless of who you support because it will be the Democrat game plan on whoever survives this primary season (and the Democrats will certainly try to implement it if Trump prevails).

“I haven’t seen a women this impressive since Jeb Bush”  I do not watch it much anymore, but that line is funny.

Mark Steyn: Witless Ape and The World They Made

Here’s also a suggestion to Megyn Kelly and Fox News, avoid personal confrontations with Donald Trump at the next debate. You will get YUGE ratings anyway and another big Trump-Kelly dust up is just a distraction. Just ask straight up questions of all the candidates (Trump included) and you might direct some at issues involving Hillary Clinton and Bernie Sanders too (since whoever prevails will likely be facing one of them in the general). How about a few early questions (when ratings are highest) about Hillary’s criminal investigation or the re-review of what really happened at Benghazi?