13 Hours: The Secret Soldiers of Benghazi: The Obama Administration and CIA (covering their asses) versus the actual security detail heroes who defended the Benghazi station that night...

By evilbloggerlady | Jan 17, 2016 12:07 AM ET
Share Tweet
Share
Tweet
13 Hours: The Secret Soldiers of Benghazi is an excellent movie and recommend you go see it. The movie starts off by saying it is a true story. Not surprisingly, given how he is portrayed by the character “Bob” in the movie, the actual Benghazi CIA Station Chief does not care for the book and movie’s depiction of his actions (leading up to and during the al Qaeda and Ansar al-Sharia terror attack on the U.S. Consulate and CIA Station in Benghazi on the night of September 11-12, 2012).
One of the most hotly disputed points (other than why no air support ever came) is whether “Bob” issued a stand down order that delayed the rescue attempt of U.S. Ambassador Chris Stevens and Sean Smith  (they were at the consulate compound a mile away) by approximately a half hour and likely contributed to their deaths by smoke inhalation.

The CIA denies a “stand down” order. That is disputed by the security detail who heroically defended the station that night:

In interviews, the contractors have been adamant that the “stand down” order was issued. Earlier this week, Rep. Trey Gowdy (R-S.C.), chairman of the House Select Committee on Benghazi, said in an interview with the Boston Herald that when it comes to the stand down order, “there are witnesses who said there was one and there are witnesses who said there was not one… So the best I can do is lay out what the witnesses say and then you are going to have to make a determination as to who you believe is more credible.” 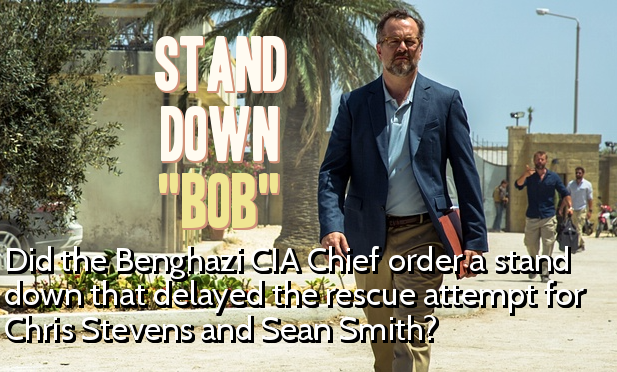 [Mitchell] Zuckoff [who wrote the book 13 Hours: The Secret Soliders of Benghazi which the movie is based on] issued a statement this evening through Paramount:

“The movie and book got it right. The CIA spokesman’s comments are predictable but not remotely credible.

“If you read “Bob’s” statements to the Washington Post, he would have us believe that he neither prevented the guys from leaving nor approved or ordered their departure. That’s nonsensical on its face and contradicted by facts and logic:

“– Two of our named sources, John Tiegen and Kris Paronto, heard Bob say those words, stand down, which they shared with Jack and D.B., who already understood that they were being held back. Our two key sources are on the record, with their names, while Bob remains shielded by anonymity.

“– Neither Bob nor the CIA disputes that a delay occurred and that the guys ultimately moved out without his authorization. That, logically, adds up to a simple conclusion: he held them back and then they left without his approval.

Instapundit: Moe Lane, Rescue Team Turned Back, Paul Mirengoff: The movie and the politics, Yes there was a stand down order, reports from the premier, and yes the movie is very good

DC Whispers: ’13 Hours’ Author declares there WAS a Stand Down Order

Proof Positive: 13 Hours opened on Thursday, why haven’t you seen it yet?

PJ Media: Was an AC-130U Gunship available in Benghazi?  Is so, who ordered it not to fire?

Gretchen Whitmer Blames Everyone but Herself for COVID Increase
T.LaDuke

The Responses To This Slate Writer's Call To End Outdoor Masking Tell You All You Need To Know About The Left
Townhall
Sen. Kyrsten Sinema has a not-so-subtle four-letter message in her latest Instagram post (Check out her ring!)
Twitchy
Joe Biden Takes Inane Mask Hysteria to Another Level
Redstate
BREAKING: Three Dead in Austin 'Active Shooter' Incident
PJ Media