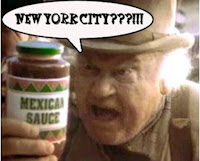 Seriously, no one cares about this faux controversy
other than the candidates and media…
I missed a big part of the debate last night because I went to watch 13 Hours: The Secret Soliders of Benghazi (which I recommend you all go watch as soon as you can)(Ace loved it too as did Moe Lane).  But apparently an exchange between Ted Cruz and Donald Trump about New York Values was so offensive to citizens of Gotham. Really? I find it far more offensive that New York City elected a Mayor who is openly a Red Sox fan (emphasis on the Red).
Was anyone in New York ever offended by this video below? Or by Taxi Driver, Death Wish, The Warriors, Escape from New York, Out-Of-Towners, Bonfire of the Vanities, I could go on all day naming negative movies and cultural depictions about New York, that New Yorkers love.

Truth is most Republican primary voters are not the least bit offended by Ted Cruz accusing Donald Trump of having New York Values (other than Trump supporters who are offended by any criticism of their guy).  Most don’t care. I thought Ted Cruz was way more brutal to Trump early in the debate (the part I saw) when he absolutely crushed Trump on the allegations Ted is disqualified for President for being a covert Nanook of the North.On this New York value issue, what I would have liked to seen is Cruz explaining how New York City values (politics) have destroyed upstate and western New York. Rural New York State’s economy is in ruins thanks to horrible policies generated in New York City and Albany. That would have been worth a sentence or two because it would resonate to people well beyond New York States (because many other states are also tyrannized by urban liberal strongholds).

Remember Obama bragging in the SOTU about lower energy prices? So why can Pennsylvanians get the benefit of that (by fracking on their land), but New York State residents cannot?  Oh wait, look at this: Instapundit: Ted Cruz’s brilliant non apology

Rush Limbaugh: The Drive By Affair With Trump Won’t Last, Best Debate So Far, GOPe should blame themselves for Trump

Legal Insurrection: Did Cruz set a trap for Trump? Actually Cruz just did to Trump what Trump normally does to other candidates. He got a bunch of free media attention out of it.  Trump actually benefits too. This race is coming down to Ted and Trump. You know who got hurt by this?  Marco Rubio (because he wasn’t part of it).

TOM: Ted and Trump, Barnard College and Columbia Rape Culture
Wombat: JWF: Democrats Freak Out Over GOP Debate
Wombat: Haley’s jabs at Trump in her SOTU rebuttal
Friday Fiction: Smitty/Darleen
EBL: Jeb gets the coveted Lindsay Graham endorsement
Instapundit: Take back your negative #NewYorkValues comments Ted or be banished to the corn fields, #NewYorkValues with Jonah and Ben Shapiro
Mark Steyn: The Winnowing  Mark thinks Trump got the best of Ted on the Canadian birther issue. I did not see that in the debate I watched (I thought Ted did great on that particular issue) but politically will it hurt him?  Given Mark’s personal experience, I take what he says seriously (well I would do that even if he wasn’t born in Canada) and I guess we wait and see.
Share
Tweet
Register Login to Comment
TRENDING