Donald Trump and Football Being Soft: Is this an analogy for an over-regulated America?

By evilbloggerlady | Jan 11, 2016 11:55 AM ET
Share Tweet
Share
Tweet
The NFL, of course, did not voluntarily go to these new concussion and safety rules on their own. They were prompted with medical evidence of serious head injuries with players from repeated strikes. But the question is, did Trump do this spiel stream of consciousness or were these comments intended to make a point on regulation?  My guess it is stream of consciousness, but Trump did make a general connection on America getting soft. Trump comes off as genuine with this type of campaign style. This is why guys like Jeb are blown out by Trump.
Getting back to over regulation.  The problem with a lot of the regulations in this country is they are prompted by a real but often isolated events. A regulatory cure is proposed (often quickly and without a lot of thought, oversight or review).  And while some regulatory action is justified, often the cure tends to be worse than the harm it was meant to correct.
If only we had more leaders who thought and acted like this under pressure… 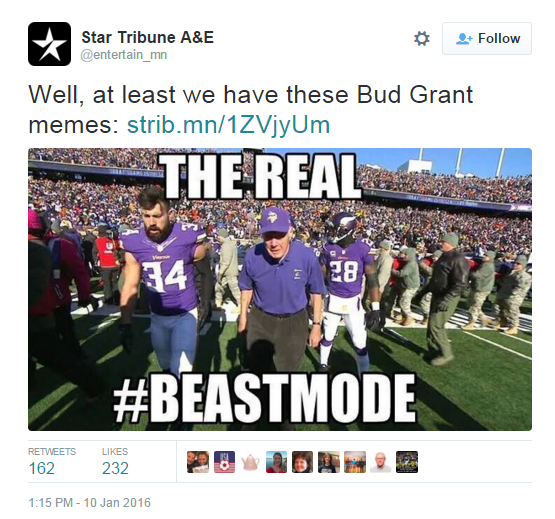 Oldschool Football
And while the Vikings lost to the Seahawks in a heart-breaker, you have to admire Bud Grant.