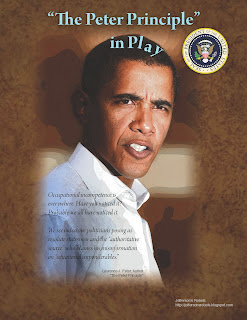 One of my graphics, posted on my blog at Jefferson’s Rebels .  Click image to enlarge. Also available as a pdf on Scribd .

President Barack Obama epitomizes the kind of person who has achieved the The Peter Principle , that is, someone who has been promoted to a position beyond his knowledge and skills.

Obama’s Military Problem is Getting Worse