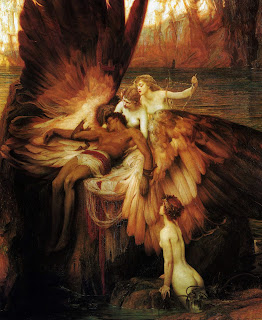 Who can forget the night of August 28, 2008 when Barack Obama strode onto the stage at Denver’s Invesco Field to accept the nomination of the DNC as their presidential candidate?  More than 70,000 screaming and cheering fans greeted the new Olympian god, Obama, as he made his entrance through the pillars of a Greek temple. The acolytes succumbed to the magic spell cast by Obama during the campaign.  Little did his devotees realize then that within one year Obama’s popularity and policy ideas would spiral downward so precipitously and so quickly.

At the pinnacle of Obama’s popularity, Rasmussen’s Obama Approval Index Month-by-Month showed him with a 23% approval rating.  It’s now one year later, and Obama is underwater with a -15% approval rating.  Perhaps a Greek tragedy is in the making, but not one that surprises those of us who took the pains to investigate this mortal during the presidential election campaign.  The blogosphere did its homework.  The mainstream media did not.

Since Obama initiated his ascent to the presidency with allusions to Greece, it’s appropriate that we reaquaint ourselves with the Greek mythological tale of Daedalus and Icarus because they and Obama are birds of a feather.

Greek myths are rich with allegories that personify abstract ideas like hope, charity, beauty, love, fidelity, intelligence, and evil.  To modern minds, Greek myths are absurd, but these myths served a moral purpose in their own times.  Once we get past the ridiculous imagery and the supernatural powers of the mythological characters, we discover morality lessons relevant to our time.

French psychologist, Paul Diel, authored a book, Symbolism in Greek Mythology: Human Desire and Its Transformations in which he used introspective analysis and the psychology of motivation to decipher mythological characters.  He then applied his analyses to modern human behavior.  When this book was published in 1972, Barack Obama was only 11.  If Diel were alive today, he would probably be the first to notice the parallels between the myth of Icarus and the myth of Barack Obama.

Here is a synopsis of the story of Daedalus and Icarus:

The labyrinth . . . was built by Daedalus, a most skilful artificer.  It was an edifice with numberless winding passages and turnings opening into one another, and seeming to have neither beginning nor end, like the river Meander, which returns on itself, and flows now onward, now backward, in its course to the sea.  Daedalus built the labyrinth for King Minos, but afterwards lost the favor of the king, and was shut up in a tower.  He contrived to make his escape from his prison, but could not leave the island by sea, as the king kept strict watch on all the vessels, and permitted none to sail without being carefully searched.   “Minos may control the land and the sea,” said Daedalus, “but not the regions of the air.  I will try that way.” So he set to work to fabricate wings for himself and his young son Icarus.  He wrought feathers together, beginning with the smallest and adding larger, so as to form an increasing surface.  The larger ones he secured with thread and the smaller with wax, and gave the whole a gentle curvature like the wings of a bird.  Icarus, the boy, stood and looked on, sometimes running to gather up the feathers which the wind had blow away, and then handling the wax and working it over with his fingers . . .

When at last the work was done, the artist, waving his wings, found himself buoyed upward, and hung suspended, poising himself on the beaten air.  He next equipped his son in the same manner, and taught him how to fly, as a bird tempts her young ones from the lofty nest into the air.  When all was prepared for flight he said, “Icarus, my son, I charge you to keep at a moderate height, for if you fly too low the damp will clog your wings, and if too high the heat will melt them.  Keep near me and you will be safe. ”  While he gave him these instructions and fitted the wings to his shoulders, the face of the father was wet with tears, and his hands trembled.  He kissed the boy, not knowing that it was for the last time.  Then rising on his wings, he flew off, encouraging him to follow, and looked back from his own flight to see how his son managed his wings . . .

They passed Samos and Delos on the left and Lebynthos on the right when the boy, exulting in his career, began to leave the guidance of his companion and soar upward as if to reach heaven.  The nearness of the blazing sun softened the wax which held the feathers together, and they came off.  He fluttered with his arms, but no feathers remained to hold the air.  While his mouth uttered cries to his father it was submerged in the blue waters of the sea, which thenceforth was called by his name. His father cried, “Icarus, Icarus, where are you?”

On a simplistic level, you could say the moral of the story is that a child should follow a parent’s advice, but the moral, according to Diel, is psychologically more complex, with each symbol connected to a psychic function.

In this myth, the labyrinth represents man’s subconscious mind with its dark winding passages.  The father, Daedalus, symbolizes perverse intellect, because he is imprisoned within the labyrinth that he created with his technological skills.  He desires to rise above the despair found in his subconscious, so he attempts to escape from the labyrinth, but in so doing he misuses his talents again when he creates artificial wings that are not fully up to the task.  Daedalus imagines these frail feathers will elevate father and son to a higher euphoria.   His son Icarus symbolizes intellect blinded by vanity.  As a couplet of father and son, this filial relationship represents “a direct line of descent between qualities (or defects) of the soul.”  By this Diel means:

The intellect (father) has become perverted imagination (son).  He has vainly put his trust in wings that are no more than artifice; he has ceased to heed sound advice; he has gone beyond all bounds of moderation; he intends to become spirit; he is determined to reach the sun.  This is the final and decisive state in the rebellion of psychic life, it is not surprising that the dream of flight is typical.  But it is most particularly the dream of the neurotic person whose illness consists precisely in wanting, but being unable to achieve spiritualization:  symbolically, in being unable to fly.

This dream-flight is the expression of vanity:  the neurotic individual finding satisfaction in his dream flight, symbolizes his real but ex
alted desire to surpass himself . . . However, all exalted desire turns easily into anguish, and vanity into guiltiness.  Thus in dreams, flight is frequently thwarted by insuperable obstacles:  an accurate expression of what is going on in the psyche of the neurotic person. The desire for elevation and its fulfillment in dreams change into the anguish of falling and even into dreams of falling (this is the symbolic expression of actual experience, of rue setbacks, which are the inescapable consequences of a faulty attitude towards real life).  The dream of flying becomes a nightmare.

It is similarly symbolic that Barack Obama’s exaltation into the political arena began when he published his book “Dreams From My Father ”.  Not only does his story have a connection to a father of perverse intellect, but also Obama, like Icarus, has attempted to ascend from the dark labyrinth of his lonely past by developing perverse vanity (wings) to help him escape the pain of abandonment by his father and mother.  This does not mean that Barack Obama deserves pity.  Many have endured worse in their childhoods without developing vanity and artifice as a means of achieving personal success.  No, Barack Obama, has put his trust in his managers and in his oratorical skills to convey a false image of omnipotence for himself. Which begs the question, who is this man?

Barack Obama is a mythological phantasmagoria, with vain dreams of fame and power. This mortal’s past has purposely been hidden from public view .  In its place an image has been created and nurtured by a number of dark angels, including Frank Marshall Davis , Bill Ayers and Bernadine Dohrn, Rashid Khalidi, Jeremiah Wright , Alice Palmer , George Soros , Valerie Jarrett , David Axelrod , Rahm Emanuel , David Plouffe , and the Perkins Coie law firm.  These people represent the strings and wax of Obama’s wings, which elevated him into the White House. Without these masters of puppetry, the unknown rabble rouser from Chicago would not have been elected President of the United States. Vanity inspired Obama to become complicit in their plans to hide his background in a labyrinth.  Together they are attempting to transform America into a statist’s utopia.

Like his sibling, Icarus, Obama has finally begun his political death spiral, because he is an ideologue incapable of moderating his statist’s views.  He may once again attempt to exalt himself in the public’s eye with soothing words, and give an appearance of moving to the political middle, but he won’t be able to maintain his lofty rhetoric for long.  The public is now wary.

Obama doesn’t understand the philosophical basis of moderation, referred to by the Greeks as the golden mean (the desirable middle between two extremes); he certainly does not practice bipartisanship, regardless of his rhetoric. Most certainly, Obama doesn’t agree with America’s founding constitutional principles.  His lack of understanding about economics will become one of his Achilles’ heel, and the other will be his weak and feckless approach to foreign policy.  And, finally, Obama does not agree with capitalism, which has been the heartbeat of American success.  Pluck these feathers from his wings one by one, and watch him decend into obscurity.  Already,  Obama’s feathers are falling off as his grandiose fantasies (wax) melt in the sunlight of public awareness and growing anger.

The American people who voted for Obama are finally realizing that he is a mere mortal with modest talents.  Obama is also a glib deceiver.  He dare not let people know who he really is .  Obama is perilously close to failure.

So erst with melting wax and loosen’d strings
Sunk hapless Icarus on unfaithful wings;
His scatter’d plumage danced upon the wave,
And sorrowing Mermaids deck’d his watery grave;
O’er his pale corse their pearly sea-flowers shed,
And strew’d with crimson moss his marble bed;
Struck in their coral towers the passing bell,
And wide in ocean toll’d his echoing knell.” 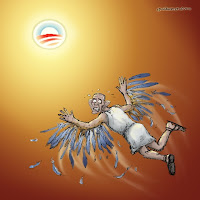 Maybe we should also reacquaint ourselves with the story of the Greek Trojan Horse ?

Gavin Newsom Taken to the Legal Woodshed at SCOTUS. Again.
Townhall
'I can't stay silent': High school math teacher says that 'antiracist' training 'is the opposite of truth in advertising'
Twitchy
Jen Psaki Stumbles Upon the Truth After Asked if Biden Admin Is Contributing to Vaccine Hesitancy
Redstate
[WATCH] CNN Director Admits Network Ran 'Propaganda' to Get Trump 'Voted Out'
PJ Media