Give up on cyber-security now?? Or later? 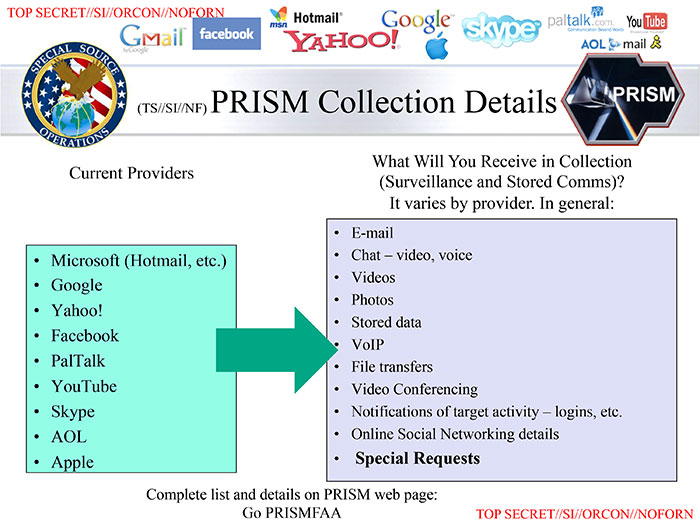 You might feel more that a bit assailed these days if you value privacy.
(read on, we’ll give you the solution below)  Recent headlines:

The NSA, CIA and FBI claim to have FISA court authorization to watch anything you do on the Internet or cellular networks; in spite of many legal prohibitions against the NSA and CIA engaging in domestic spying.

Microsoft gives your email/cloud data to the NSA before it’s encrypted.  Pretty much the same with Google and many others.

President Obama has encouraged federal workers to spy on each other.

Even local police are scanning and keeping records of where they see your car.

Obama loves leaks that benefit his administration, but cracks down oppressively and obsessively on the whistleblowers he really hates.

The DOJ swears before a court that an innocent FOX news reporter engaged in his trade is a traitor to the US.

The DOJ sets up an email address for the sole purpose of encouraging the public to inform on one man – one man – who was recently acquitted by a state jury; where it’s own investigative arm, the FBI, revealed no suspicion of wrongdoing or civil rights violations.

Out-of-control spying agencies combined with an out-of-control DOJ with no regard for truth or justice does not bode well for present or future American liberties.

While I fully recognize that I may be a year or two ahead of events here, some will want to prepare for what looks like the inevitable.  Some will want to start attending to their online information privacy and security now.

I have one word for you now, if you’re interested.  Tor.

If you’re not interested now, just tuck this nugget of knowledge away to use next year or the year after.  You will need it eventually because Congress seems to side with the intelligence agencies in wanting unfettered access to any information you voluntarily yield to them.

My wife says, “I have nothing to hide.” And this is true for most of us.  But do you want ‘everything’ you do out there in a country where ‘everything’ is rapidly becoming a crime and the DOJ shows no interest in ummm… justice – and a penchant for lying about you in court if they decide they want you?  Do you want to passively grant them all the information they want on you with no scintilla of protest?

The key words there, of course, are “voluntarily yield” – because you do have a choice and you should exercise it.  You do not have to grant intelligence agencies unfettered access to your traffic, habits, and details.  You can browse and interact privately and at the same time, quietly register your protest of government behavior.

Tor was originally developed by the US Naval Research Laboratory in the mid/late ’90s to protect US Government communications.

Properly applied, it works pretty darned well to protect your privacy, anonymity and help with your cyber-security.  For those of you who I know are going to ask, yes: it’s Open Source.

Today, Tor protects rape, abuse and human trafficking victims and investigations against their perpetrators.  It protects people participating in survivor groups.  It protects dissidents who need to get the word out about what’s happening in their countries.  It protects human rights activists from being discovered by truly oppressive governments.  It allows police departments to conduct investigations into pedophile, drug and hacking rings without disclosing easily discovered law enforcement IP addresses.

Yes, the Tor net (or ‘dark net’ or ‘hidden internet’) is also the home of Silk Road, the pedo sites and other unsavory destinations, but just like the rest of the internet, you don’t have to visit the resources you wish to avoid.  Currently, Tor resembles the wild west days of the internet circa 1993.

The Electronic Freedom Foundation recommends Tor as part of its ‘Surveillance Self-Defense’ program.

First, just download the Tor package (about 27Mb) and unzip the package on your hard drive or onto a USB ‘thumb drive’ stick (if you’re paranoid, clear your browser history and cache after you do this).  Then just run the only program in the folder you just created.  Tor does not install software on your system to leave tell-tale tracks that could be discovered later (although Tor is entirely legal today, some are concerned that this will quickly change).

Read Tor’s cautions about proper use to preserve your anonymity and privacy.  Even with privacy-enhancing tools like Tor, it’s easy to accidentally make disclosures.

If you are so inclined, adjust Tor’s settings (click ‘Setup Relaying’) to help others by becoming a relay or a bridge (which helps dissidents in oppressive countries reach the rest of the internet safely).

Explore.  Have fun.  You can browse both the clearnet and the hidden net with Tor.  Tor ‘hidden services’ web sites all end with a .onion web address.   Report your experiences back in the comments.

Don’t give the government the keys to your kingdom for free.

The Supreme Court Redistricting Case That Some Warn Could Lead to Single-Party Rule
Townhall
Alrighty then: Jim Carrey is leaving Twitter … we say goodbye with some Jim Carrey movie quotes
Twitchy
Trump's Meeting With Kanye Was Planned to 'Make Trump's Life Miserable' and the Plan Worked
Redstate
4 Reasons Police Haven't Arrested or Named a Suspect in the Idaho 4 Murders
PJ Media