It’s been roughly a month since the RNC hired Liberty Works and Data Trust to carry out what many consider the RNC’s most crucial mission of the next few election cycles for the GOP: furnish the digital infrastructure for electoral victory against the robust set of tools that the Democrats have put in place over the last 10 years.

The sad news at this point is manifest: neither company yet has a web site that can be discovered with a Google search.  It begs the question of how these firms competed successfully for RNC’s multi-million$ ($10-$20 million) in new media business without even a placeholder web site to demonstrate their new media prowess.  It must have been about ‘trust relationships’ rather than any demonstrated expertise or track record in new media.  This means that the companies that received the contracts have the names of past RNC chairs and staffers on their rosters.  Names Like ‘Rove’ and ‘Duncan’. 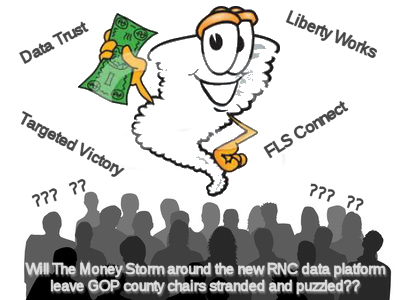 In fact, the Google searches linked from both company names above suggest that both will have copyright/trademarks problems with the unfortunate corporate names they chose for themselves (obviously without even a bit of trivial search engine ‘due diligence’ or ‘research’).  All company names mentioned above have already been taken.  Several times.

Sadder still, news reaches us today via Politico that Liberty Works may sub-contract the actual platform work to a firm called Originate that, while certainly possessing the requisite tech expertise, also comes across as a very far left-leaning company.

Perfect for a GOP project.

It certainly produces the prospect of a veritable money storm around RNC digital ambitions for the GOP, but will state and county chairs be advanced in their goals of having better digital tools for their GOTV ground games, or will they be left stranded and puzzled once vendors’ profits have been booked and shareholder dividends distributed?

So just what is the RNC doing wrong?  Many folks have tried to nail it.  Michael Turk would have you believe that it’s not the RNC but tech-illiterate campaign consultants, which is indeed a factor.    Erick Erickson blows right past the data itself to state that data analysis is the failure. But before we can analyze the data, we must first possess data to analyze.

Then once the data is analyzed, we must be able to communicate with the people that the fruits of that analysis represent.  To me, that means email.

This we cannot do if the RNC is not sharing email addresses.  Currently getting those email addresses to GOP campaigns and local parties is reserved as an income opportunity for former RNC staffers.

The RNC has dazzled the GOP elect in many recent meetings by speaking of things like ‘open source platforms’ and ‘APIs’ and so forth.  Let’s take a look at the realities.  Naturally, they don’t mention sharing email addresses in these meetings, and they caution those who ask about sharing emails not to email to folks who have not ‘opted-in’ in spite of the fact that many SPAM laws do not apply to many political campaigns.

A very diligent search of Github on many related search terms reveals no open source projects that would apply to RNC voter data sharing.  Perhaps it’s a bit too early.  But if the RNC and Liberty Works are serious about open source, then a project should soon appear at Github, the spiritual center of all open development.  We see very little evidence that Originate (above) has ever managed open source projects before.

APIs sound cool, and they are cool.  But APIs are also for campaigns with very, very deep pockets.  Presidential campaigns.  US Senate campaigns.  Maybe a few very well-heeled US House campaigns.  Running for county commissioner or the state assembly or senate?  Forget it.  Most talented API programmers plan on sending their kids to Stanford and generally won’t be working for your typical state house campaign.  And the talent pool is not all that happy about RNC plans anyway.

Widgets, the copy/paste ‘devices’ that webmasters can paste into any web site, are where the rubber really meets the road for APIs on common campaign web sites.

There’s a cadre of us who plan to be at the LincolnLabs Liberty Hackathon to make just that case for mass market campaign widgets that will implement RNC APIs – those vendors who pay close attention will clean up on monthly subscription fees in the mass market for small campaigns.

While we can probably trust that the Liberty Hackathon will not be a replay of the GOP Tech Summit in 2009, we need to be sure that we convey the needs of the county and state GOP tech committees to the developers at this conference.

If these developers are aware of the possibility of the continued practice of not sharing emails (and many other RNC practice  issues)  they may be able to use their influence to suggest changes in some of these practices.