Cinco de mayo may become the official day of the Mexican invasion of the United States of America.

What is so special about May 5th? (cinco de mayo) 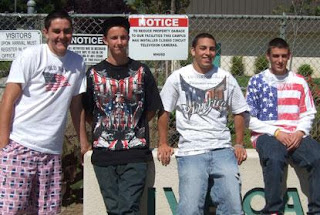 According to published reports, the five boys were sitting at a table when they were ordered to remove American flag bandannas and turn their flag t-shirts inside-out. When they refused, they were taken to the principal’s office.

“They told us basically we take it off or we can get suspended,” Matthew Dariano told KCBA, the FOX affiliate in Monterey.

“They said we could wear it on any other day, but today is sensitive to Mexican-Americans because it’s supposed to be their holiday so we were not allowed to wear it today,” said Daniel Galli, in an interview with the KTVU in San Francisco.

The students were allegedly told that Cinco de Mayo is “not the day for patriotism.””

More than 200 Hispanic students reportedly skipped class on Thursday and marched to school district headquarters while chanting “we want respect” and “si se puedes” — “yes we can” — the Morgan Hill Times reported.

“We did this to support the Latino/Hispanic community,” Francine Roa, a 2005 Live Oak High School graduate, told the newspaper.

Police have been told to be on alert for gang-related retaliation against the boys, according to Ken Jones, whose stepson, Daniel Galli, was one of the students who refused to turn their T-shirts inside-out when asked by a vice principal on Wednesday.

The answer is technically B, but it could be argued that both would suffice.

Is the intensity and enthusiasm and National pride of Mexico at such a fever-pitch that this day warrants such fierce celebration in the United States that would cause anyone of Mexican heritage to cast aside their pride in the country that has given them the opportunity to live in a free nation and to enjoy the fruits of the opportunities they will have here as opposed to the lack of opportunities they would have in Mexico (THAT COUNTRY WOULD BE AMERICA).

One would think that with the audacity of  SOME “Mexican-Americans” to become “offended” by the mere presence of an American flag HERE IN AMERICA that the entire country of Mexico would be shut down in celebration as well, but alas no that isn’t the case as Independence day in Mexico isn’t actually until MAY 16TH!! and cinco de mayo isn’t even officially celebrated in Mexico.

So you see why I would have to give you credit for both answers.

The response of the other students is disgraceful but it reveals yet another stanch reality about the control, how deedl-rooted and how far the Progressive movement has come in completely controlling our educational system, particularly out West.

It would appear that the plan to allow Mexico to retake the Western half of our nation just to garner Democrat Party votes is in full swing.

I never thought I would see the day when a flag from another country would have more importance HERE than our own.