Six Special Air Service (SAS) soldiers have their service dog to thank for saving their lives during an ambush in a small northern Syria village. The team, accompanied by their dog, a Belgian Malinois, left their convoy to patrol the area on foot when they came under fire from all sides (known as a 360 degree ambush) by jihadis. 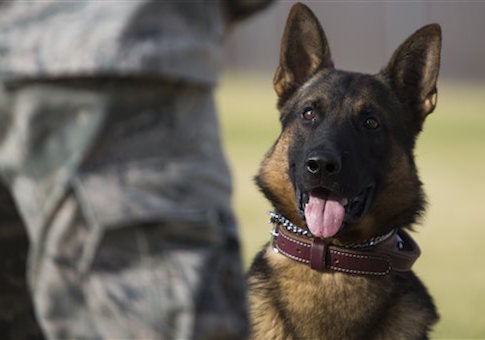 A source told the Daily Star:

The initiative was with the terrorists and the only hope for the British was to try and make a run for it. The handler removed the dog’s muzzle and directed him into a building from where they were coming under fire. They could hear screaming and shouting before the firing from the house stopped.

When the team entered the building they saw the dog standing over a dead gunman.

The incident was said to have taken place two months ago, but details of the dog’s bravery can only be made public now for security reasons.

His throat had been torn out and he had bled to death. There was also a lump of human flesh in one corner and a series of blood trails leading out of the back of the building.

The dog was virtually uninjured. The SAS were able to consolidate their defensive position and eventually break away from the battle without taking any casualties.

Highly trained military service dogs have saved the day over and over again in battle. The bonds which develop between soldiers/handlers and their dogs are often as strong as those forged between soldiers on the battlefield. Many soldiers ask to be buried with their service dogs if they should be killed in battle. The video below shows some of these extraordinary dogs in action.

Like Rats From a Sinking Ship: Another Top Dem Announces Retirement Before '22
Mike Miller

Justice Kavanaugh Just Boiled the Abortion Debate Down to Its Most Fundamental Core
Townhall
Peter Doocy backs Dr. Anthony Fauci into an extremely tight corner with question about testing requirements for 'everybody' entering the US [video]
Twitchy
The Left Is Losing Its Most Ardent Supporters as Their Failures Break the Delusion
Redstate
40 Years Ago, Monty Python Predicted (and Mocked) Wokeness
PJ Media