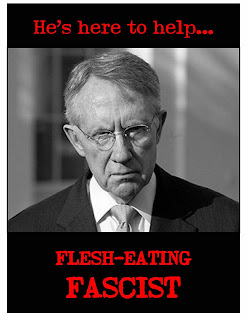 Harry Reid has a problem.  According to a poll commissioned by the Las Vegas Review-Journal, a majority of Nevadans are opposed to the Obama-Pelosi-Reid health care nationalization effort.

President Barack Obama has lost ground in the last month in getting Nevadans to embrace his health care reform package and, for the first time, opposition is above 50 percent and support is below 40 percent, a new poll commissioned by the Las Vegas Review-Journal reveals.
The telephone poll of 625 registered voters found that 53 percent of Nevadans oppose the president’s attempt to provide a remedy for problems in the nation’s health care system. Support for the plan is at 39 percent….
Fueling discontent with the bill, the poll shows, is the growing belief by Nevadans that Obama’s reform package will raise taxes, result in rationing of health care, and cause major cuts to Medicare programs.
“When you look at the entire poll, it’s clear the voters of Nevada do not want this bill to pass,” said Brad Coker, managing partner of Washington, D.C.-based Mason-Dixon Polling & Research Inc., which conducted the poll Monday through Wednesday. “When you break it all down, it appears that Nevadans would just as soon throw this bill out and start over.” [Emphasis added.]

Harry, listen to your constituents: Scrap the bill!