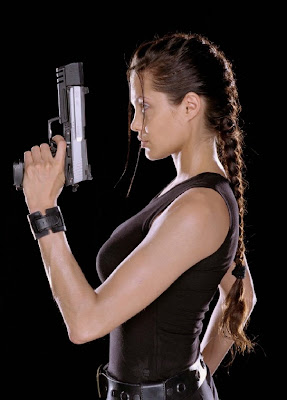 Having been occasional admirers of uber-mom and mega star Angelina Jolie–especially as the gun-toting Laura Croft–Ms Jolie’s cred just went up in our book.

According to Us Magazine, Ms. Jolie is not a fan of the Organizer-in-Chief either.

Barack Obama does not have Angelina Jolie’s seal of approval.

“She hates him,” a source close to the U.N. goodwill ambassador, 34, tells the new issue of Us Weekly (on newsstands now).

But don’t expect to see the Salt actress rally against Democrats on Fox News like her staunch Republican father, Jon Voight.

“Angie isn’t Republican, but she thinks Obama is all smoke and mirrors,” the source says.

Well said, Ms. Jolie (even if credited to a “source”).

No word, however, if Ms. Jolie is still slated to play Dagny Taggart in the Atlas Shrugged movie, or whether the part is going to Charlize Theron.

Where Did All of These Haitians Come From and Why Are They at the Border Now?
Townhall
Ted Cruz asks Richard Blumenthal a simple question about African American voter participation, and Blumenthal's answer 'speaks volumes' [video]
Twitchy
Ted Cruz Asks Richard Blumenthal a Question About Black Voter Participation That Blows up Dem Narrative
Redstate
It's All Falling Apart for Biden and Democratic Leadership in D.C.
PJ Media