Richard Trumka, the Next Boss of Union Bosses, Talks... 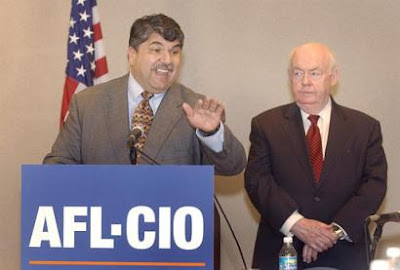 What is particularly interesting about the interview is not the typical pro-union pablum that Trumka puts out (no different than his soon-to-be predecessor John Sweeney), but his outright shot at the Service Employees International Union.

“The raiding stuff is a zero-sum game,” he says, singling out the Service Employees actions against UNITE HERE as a “particularly outrageous example.”

But raiding is just one manifestation of the perpetually thorny problem of deciding which union has the primary right to organize a particular workplace or industry. Trumka thinks unions will be able to resolve those jurisdictional disputes as the Employee Free Choice Act opens up organizing, especially if rank-and-file workers play a bigger role. “Those [jurisdictional] problems don’t bubble up but come from top down,” he argues.

This would apear to be an indirect shot at SEIU president Andy Stern who seems to on the top of the union boss’ enemy list (after George Bush and Dick Cheney, of course). [View list of Stern’s detractors here, and what they say here.]

Trumka is also confident that the delusionally dubbed Employee Free Choice Act (EFCA) will get passed:

“[W]e’ll get an act that will give us everything we need. I think it will have dispute resolution in it. It will allow us to have a union without being threatened, intimidated or fired.”

But Trumka has one ambitious new proposal: asking unions to provide a reserve army of 1,000 or more organizers who could be sent to help other unions in strategic campaigns or to fight inter-union raiding.

The one thing that was not apparently discussed in the interview was his invoking his Fifth Amendment rights against self incrimination some years ago–something that was against the rules of his own federation.

The AFL-CIO had a policy that said taking the Fifth Amendment was grounds for removal from office. Sweeney said at the time that a 1957 federation resolution said the policy should apply only to those who invoked the right in order to cover up wrongdoing.

To read the entire article in the Nation, go here.