No Contract, No Cookies...and, Now, No Job! Union Bosses Get the Milk, Members Get Crumbs

Another example of striking union members being milked by their union bosses goes by and 132 workers are now out of work.

When they went out on strike last August, the 132 workers at cookie-maker Stella D’oro located 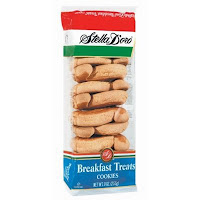 in the Bronx, New York, may have been told they could hold out longer than their employer… that no one could make cookies like they could. Perhaps their union bosses even told them that when they suffered all union workers suffered along with them. If this was the case, what a soggy mess their union has gotten them into now.

During their 10-month strike, the striking members of the Bakery, Confectionery, Tobacco Workers and Grain Millers adopted the catchy chant “No Contract, No Cookies.”

In fact, according to a post from the Democratic Socialists of America covering a May 30th rally in support of the strikers:

“This started out as a struggle for Stella D’Oro, but it’s a struggle for all working people,” Joyce Alston, President of the Bakery, Confectionary, Tobacco Workers and Grain Millers International Union, Local 50 said…

However, unlike her members, Ms. Alston didn’t seem to struggle too much in 2008 as, according to the union’s 2008 financial statement, Ms. Alston raked in $115,259 in total compensation (plus another $6,563 from the BCT’s international) while the local’s Vice President Joseph Svingala took in $108,345 last year. Meanwhile, the union’s international president, Frank Hurt, raked in $250,441 in 2008.

Now, however, according to the New York Times, one week after the National Labor Relations Board ordered the company to reinstate the 132 strikers, the company that owns the cookie factory has decided to shutter the plant entirely.

“The decision to close the Bronx bakery operations has not been made in haste or without significant planning,” a statement from the management said. Operations will be moved elsewhere and the products would continue, the statement said.

Whether the union led the strikers into believing they could win the strike or whether the union felt the company should keep a plant open despite its unprofitability is unknown. However, what is known is the fact that, like so many other union-led strikes, it was the workers who lost while the union bosses continued milking the members.