For all you Maryland Red Staters out there, here is some inside baseball in Baltimore County.

We have observed the widespread misinformation disseminated by so-called “Blue Dog Democrats” this election season concerning their political ideology.  People like Frank Kratovil vote with the Democrats, are funded by Democrats and outside leftist organizations, and enable the election of their liberal leadership, yet, they manipulate their voting record in order to call themselves independents or conservatives.  Well, Democrat state legislators who reside in swing-conservative districts are no different.

For the past eight year, state Sen. Jim Brochin (D-MD-42) has knocked on every door in Pikesville and Towson and lied to his constituents about his political allegiance.  He tells everyone what they want to hear.  Most of his constituents are moderate or conservative so he tells everyone that he is a fiscal conservative.  On his website, he makes no mention of his party affiliation, calling himself a “proven independent”.  Here are some things that Baltimore County voters need to consider:

1. The Democrats in the Maryland state legislature are even more radical than those in DC, yet Brochin decides to affiliate with them, vote for their leadership, and enable radicals like Brian Frosh to become committee chairmen.  We all know the game.  It’s the same game that frauds like Frank Kratovil play on a national level.  They pad the Democrats with larger majorities and then receive a hall pass to vote against the leadership on a few token votes because they represent conservative leaning districts.

2. Brochin calls himself a conservative, yet, in the gubernatorial race between the most liberal Democrat governor in the country and a moderate Republican, he is supporting the radical Democrat.  The radical, Martin O’Malley is the same man who referred to illegal aliens as “new Americans”.  Brochin always tells people that he is against illegal immigration.  So why is he supporting O’Malley?  And for good measure, Brochin supports Obama.  Need I say more?

3. Jim Brochin brags about the fact that hew won’t vote for a direct tax increase, but being that he is a radical eco-socialist, he votes for all of the cap’ and trade’ style demands on state industries.  This is a back door tax increase.  Worse yet, it is extremely regressive, as it raises the cost of goods and services that are universally in demand.

4. Brochin supports the radical homosexual agenda in Maryland.  With Attorney General Doug Gansler pushing hard to recognize gay marriage in Maryland, Brochin would be a key ally in the Senate.  These are not the values of most of Brochin’s constituents.

For me, the final straw was when I saw mailings and advertisements for Brochin from socialist Senator Ben Cardin.  Before we discuss the content of these ads, the question begs, how can a “fiscal conservative” advertise the endorsement of one of the most radical elected officials in national politics?  Cardin has one of the lowest lifetime ratings from the American Conservative Union, and according to the Washington Post, he is virtually tied with the most liberal members of the Senate.  Keep in mind that this is a Senate that includes Barbara Boxer, Al Franken, Chuck Schumer, Pat Leahy, and Bernie Sanders!  So I guess Jim Brochin is simply showing us his true colors.

Brochin’s disingenuous arguments don’t stop there.  Here is the copy of the advertisement that Cardin placed in a local Jewish publication for Jim Brochin. 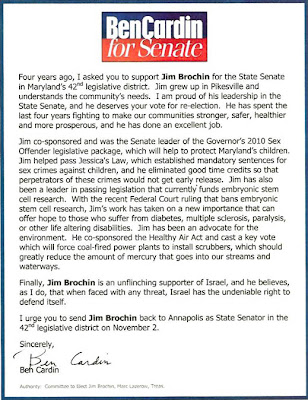 Let’s pick through the rubble one issue at a time.

1. Jessica’s Law: So here is a situation in which the Republicans, led by state Sen. Nancy Jacobs (Harford-Cecil) and WCBM radio, pushed for mandated sentences for child sex offenders.  Incidentally, Cardin’s liberal friends did everything in their power to stop it.  In the end, the bill passed due to public pressure, albeit a much watered down version.  Ben Cardin has opposed these sorts of mandates for years, and although Brochin voted for it, it was purely political because a nay vote would have been a career breaker in his district.  Cardin’s claim that Brochin co-sponsored the bill is a joke because every yay voter is usually a co-sponsor in the Maryland state legislature.  The real sponsors of the bill were Republicans and conservatives, so according to Cardin’s own criteria he should support Brochin’s opponent Kevin Carney, because his support would be more reliable.

2. Embryonic Stem Cell Research: Once again Cardin offers the typical disingenuous liberal demagoguery of blending in the benefits of adult stem cells and cord blood into a discussion of embryonic stem cells.  There have been no proven breakthroughs from ESC research to this date.  It is the Democrats who are playing politics by holding up Republican bills to fund stem cell research so they can divert funds to embryonic stem cells for the purpose of advancing their radical abortion agenda.

3. Environment: Cardin touts Brochin’s support for the Healthy Air Act.  Well, with a name like that who would oppose it?  The bottom line is that this bill was nothing but a makeshift version of cap and trade, except that it only caps without trading.  In act, Brochin has voted for every regressive environmental law in Maryland ever since he stepped foot in the Senate.  But don’t worry, he will look you in the eye and say that he does not raise taxes, especially on the “working class folk”.

4. Israel:  This is perhaps the most pathetic pitch of all.  Is he trying to insult the intelligence of the local Jewish community by selling himself as pro-Israel while running for the state legislature?  This is pandering in its most hollow and cynical way.  And besides, here is what Cardin wrote concerning his “pro Israel” stance. “and he believes, as I do, that when faced with any threat, Israel has the undeniable right to defend itself.”  Ha! So Cardin and Brochin are one step to the right of Hamas and the European Nazis in that he doesn’t support the outright destruction of Israel!

The truth is that this is actually the extent to which Ben Cardin support Israel.  Cardin is one of the most anti-Israel Senators in American history, despite the fact that he is Jewish.  While Obama was launching his jihad against Israel and demanding that they stop building in their own Capitol, Cardin failed to join with some of the most liberal Jewish Democrats who called on Obama to stop bullying Israel.  In fact, Cardin resoundingly endorses Obama’s policies towards Israel.  You can call his office any time and his Foreign policy LA will admit it.  Here is what Cardin had to say about Israel’s “right to sustain themselves”:

“There is no excuse for Israel’s announcement of plans to expand housing units in East Jerusalem when Vice President Biden was on the ground meeting with the highest levels of the Israeli government. While the Vice President was on a mission to restart the peace process, such an announcement was a mistake”.

Hey Senator Cardin, maybe you ought to shut your mouth and stop lecturing people on who is pro Israel, especially regarding an election that has nothing to do with that issue.

5.  It is interesting to note that there is no mention of Brochin’s support for gay marriage in this letter to the Jewish community.  I wonder why? Why no mention of the fact that Brochin supports Obama?  Is Obama also pro-Israel?

The bottom line is that people can and should disagree on ideology and engage in an honest and transparent debate concerning their views as a candidate and public official.  Jim Brochin is not man enough to own up to his liberalism, because he knows that his San Fransisco values don’t play well in Towson.  So the next time Brochin knocks on your door and tells you how conservative he is, tell him to be a man and own up to his left wing ideology.  The best way to end Brochin’s dog and pony show is by voting for Kevin Carney for state Senate in the 42nd district.