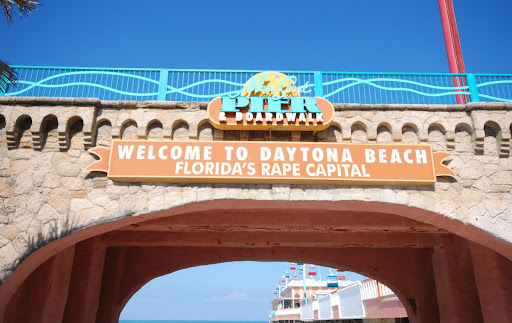 DAYTONA BEACH – The city long besieged by widespread corruption has earned a new dubious title: “Florida’s Rape Capital”. A very disturbing trend of rapes of teens and young women in plain daylight in public buildings turned what was to be a pleasant vacation on the beach for college kids into living nightmares for them and their parents.

Daytona Beach Police reported that rapes in the City have increased a whopping 100% from last year during this Spring Break.

The sad part is that many girls and women who are assaulted, not just during spring break, but at other times during the year, do not come forward to report the crime deciding it’s not worth the effort due to the overall prosecutorial apathy that permeates the famously corrupt town or they may be just too embarrassed to come forward.

One rape allegedly occurred in a men’s washroom at newly finished Ocean Center on Sunday. The attack at the event center run by local officials occurred just after 4 p.m. as crowds milled about the facility during the 24th annual Spring Break Nationals, a mobile electronics trade show.

The City of Daytona Beach leaders had just inaugurated a much criticized multi-million dollar expansion of the Exhibition Hall ostensibly advertised to attract businesses to the area. Planned demand never materialized due to the reluctance of companies willing to associate their business events with Daytona Beach.

Rapes are happening everywhere but concentrate on Daytona’s beachside; Two reports came from the Desert Inn, including one from a 14-year-old girl. A woman reported being attacked on the beach at the ocean deck. In another report, a man was caught raping an unconscious girl in a hallway of the upscale Plaza hotel.

According to the Daytona Beach News Journal, More Spring Break-related rapes have occurred than initially tallied by police, quoting a rape crisis official who added that she encouraged victims of such assaults to report attacks to rape counselors, even if they don’t want to go to law enforcement.

The newspaper reported that word of that many sexual assaults in such a short time span has already graced national headlines and, earlier this week, angered several Daytona Beach residents at a City Commission meeting. A handful of residents bemoaned that media reports of the sexual attacks are giving the city a bad rap.

“All of last year we had a total of 41 sexual assaults. Here we have SIX in ONE WEEK!”

“It doesn’t matter what they believe or don’t believe” (referring to local police officers, criticized for lack of sensitivity towards victims)

“They should take the report and let the detectives sort out the rest of the story.”

The City of Daytona Beach has been besieged by an unprecedented wave of political corruption. Plagued with ineptitude, cronyism and undue influence to the service of a handful of multimillionaire special interests widely known as “The Five families” or “The Daytona Capos”. The city’s finances have been literally depleted after funneling millions of dollars to fund everything from hobbies and indulgences of commissioner’s political supporters to the overpriced purchases of properties from themselves, cronies and friends. 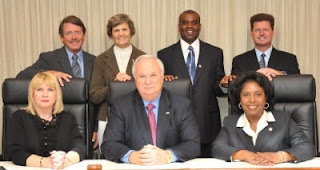 This pillaging of public funds has left no moneys to pay for public safety, schools, social and youth programs or repairs to a dilapidated infrastructure. Just this last Spring over 1,600 Daytona Beach homes were substantially damaged as a result of flooding due to inadequate water management infrastructure and downright negligence by the city. Thousands of families were left homeless and photos of children walking in raw sewage circulated nationwide. It has long been known that Daytona’s chronic problems are not a police matter but a fundamental breakdown of its society into anarchy as a result of in-your-face corruption and impunity.