How does your state treat Christian free marketeers?

Medi-Share was found to be an unregistered health insurance company in 2010 by the Kentucky Supreme Court. The Court ruled the company failed to meet all requirements of the Religious Publications Exemption in KRS 304.1-120 (7), specifically the one requiring health sharing members to pay each other’s medical bills “directly from one (1) subscriber to another.”

Whether that requirement is met under current operations is somewhat open to interpretation. Medi-Share members now send monthly funds to a credit union account the member and Medi-Share control jointly. The Kentucky Department of Insurance and the Supreme Court claim such an arrangement does not constitute direct subscriber-to-subscriber payment.

But even if the Department and the Court change their minds and decide that this method is direct enough, there is at least one more problem for Medi-Share. Gaining the exemption also requires that there can be “no assumption of risk or promise to pay either among the subscribers or between the subscribers and (Medi-Share).” 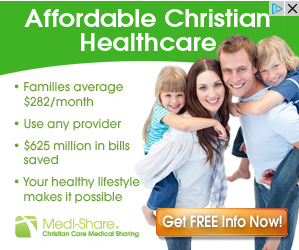 Medi-Share’s many advertisements (like the one above) are full of eye-popping numbers like an average family month commitment of $282 and a claim of $625 million in savings. Also, anyone who has had to call around to find an agreeable doctor has to be impressed by the idea of having the freedom to “use any provider.”

All this is suggestive of a “promise to pay,” but the fact that is going to get them is that members who don’t pay their monthly fees for two months will be dropped from the program and will not have outstanding medical needs presented for payment. That sounds obvious, but the fact of a requirement to pay in order to benefit is the legal definition of a “promise,” which is prohibited under the law.

The ridiculous hoops we require these people to jump through to enjoy some measure of health freedom need to be eliminated. But they can’t be wished away or shouted away. We need to change the law.

Canadian Pastor Dragged Off by SWAT Team Out on Bail Has a Warning for Americans
Townhall
Remove head from a*s BEFORE tweeting --> Rob Reiner's attempt to blame Trump for violence in the Middle East BACKFIRES spectacularly
Twitchy
Evil Republican Governors Move to Cancel Enhanced UI, Then One Evil Democrat Joins the Party
Redstate
OUTRAGEOUS: Space Force Unit C.O. Relieved of Duty for Criticizing Marxism in the Military
PJ Media