An ObamaCare amendment for everyone

Two years ago, U.S. Senator Chuck Grassley of Iowa inserted a religious-based health sharing exemption into ObamaCare before he voted against the entire bill. If we can’t kill the whole bill, the current Congress should expand that exemption.

From the Affordable Care Act on page 128, we find the following passage: 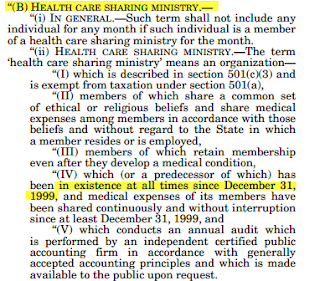 What we need more than anything is more alternative forms of protection for Americans, rather than fewer or a fixed number. President Obama and congressional Democrats had to like this passage or they wouldn’t have it in their bill, right? Surely they wouldn’t mind making it better.

Limiting the exclusion to religious organization who started their health sharing activities on or before December 31, 1999 is discriminatory and arbitrary. If a group of gay left-handed communists want to set up a church and start their own health sharing organization, they should be allowed to under federal law. It is only fair.

Please encourage your member of Congress to amend the Affordable Care Act to strike both references to December 31, 1999 in the Health Care Sharing Ministry section of the bill so that they may do so.