Post-ObamaCare, Kentucky to lead the way?

The fight for health care freedom in Kentucky still faces odd resistance from marketers of the closest thing to Liberty-oriented health coverage available to Kentuckians.

It’s time for that to stop.

As of yesterday, the Alliance of Health Care Sharing Ministries had posted on their web site false information justifying their exemption from Kentucky state insurance regulation. Today, the information is changed but it is still false. 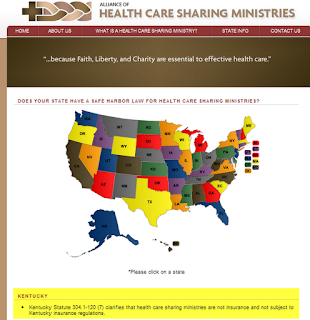 The statute referenced above is the Religious Publications Exemption which would exclude health sharing organizations from regulation if they did not in any way act as a financial intermediary between customers and health care providers. The organizations I have looked at all function as intermediaries.

Again, the problem is with the law. Kentucky’s definition of insurance is so overly broad it essentially means whatever insurance regulators want it to mean. This exemption is so narrow as to apply to only extremely small organizations. In fact, if your church ever pays medical bills for needy members, it could be shut down by state government under current law.

Additionally, Kentucky has a unique constitutional provision that turns this whole mess on its head potentially for the benefit of all Americans. Section 2 of the Kentucky Bill of Rights prohibits government at any level from exercising arbitrary power.

Kentucky’s Insurance Code is the poster child for arbitrary power because it is authorized to exercise control over people without clearly defined limits on the scope of that power.

Fixing this problem involves a simple approach which would serve Liberty for Kentuckians right away and then spread like wildfire over the rest of the country. The approach involves decriminalizing the selling of “unauthorized” insurance in the state.

Look at it this way: the Commonwealth of Kentucky has been burning public resources for a decade trying to chase Christian Care Medi-Share out of the state. Today the company still operates here and the Department of Insurance is still claiming to care about consumer protection.

Let the legislature define “insurance” to mean only companies who voluntarily request government regulation. Some actually might. The big insurers have grown accustomed to the government protection; let them have it if they wish.

But a shadow economy in insurance need not be a black market. We could have a “free” market to go alongside the “government” market and let the people decide which works better. Kentucky’s Constitution specifically creates this opportunity for us, we just have to invoke it.

Alliance of Health Sharing Ministries, that means you. Your member organization, Christian Care Medi-Share is already in a legal battle for its ability to serve customers in this state. Stop screwing around with your web site and come to their aid with the Kentucky Constitution as the only weapon you need.