"Democracy" in Iran and The United States

The results of the past weekend have coalesced the thoughts in my mind of the similarities and the differences between “democracy” in Iran and the United States. Last weekend, as Iranian citizens took to the streets in protest of what they perceived as a stolen election, I was attending the Michigan Tea Party Convention, during which leaders of the Tea Party Movement in the state discussed “where do we go from here.”

In Iran, a small elite group of Theocrats run the country — they select the presidential candidates according to their acceptability to an Islamist doctrine of hate — and a narrow worldview.

In the words of Amil Imani, “The great majority of the people of Iran are disillusioned and even disgusted by the medieval incompetent, oppressive, and corrupt rule of the mullahs, irrespective of which mafia gang is in power. The votes, more than anything else, are protest ballots cast against the entire system, rather than indications of support for the so-called conservative-moderate coalition.” 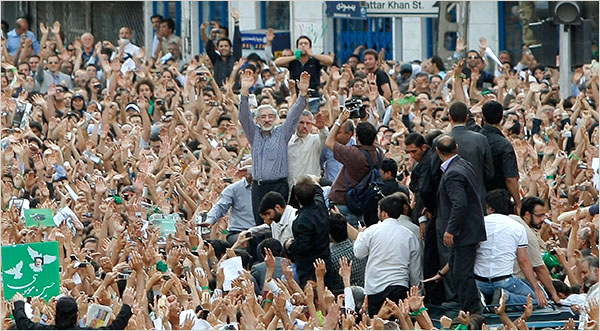 In the previous election many voters chose not to vote, simply staying home. The result, the election of Mahmoud Ahmadinejad, has been so devastating to the Iranian nation that the people vowed not to make the same mistake this time.

The mood of the country was so obviously anti-Ahmadinejad that it quickly became clear that only a rigged vote in a dishonest election could return him to power. The Iranian people received just that.

And so they protest. They protest a political system that denies them a democratic vote, while portraying to the world democracy in action. They protest an election stolen of the very facade behind which they were allowed to hide — that the ballot they cast would matter.

Carrying homemade signs, they protesters defied authority by marching through the streets. The media boycott of their plight — a virtual throttling of any news leaving the country — has forced the people to turn to the new media — the internet when available, and to twitter — to spread their message to the world.

In this country, on the other hand, the two major parties select their presidential candidates through an extended process of primaries and caucuses — selected from a small group of elites — vetted for their allegiance to party ideology — by a select group of elites — to be put before the voters for election.

More often than not the votes are “protest votes” — voting against a perceived party or policy — the lesser of two evils. In past elections, staying home has cost the electorate harm — and so they vote, reluctantly, with dissatisfaction about their choices — but they vote.

But when the voters discovered that their selection was less than honest — all of their worst fears confirmed — they began to protest the actions of their government — and the Tea Party Movement was born.

It was a movement born, not out of “sore-losers” but out of frustration with a process that elects president after president who does not represent the best interests of the people. It is a movement based upon freedom — not ideology — and the recognition that freedoms once taken for granted are fast disappearing from this nation.

The major Oldstream Media have all chosen to ignore the Tea Party movement, or worse, to ridicule and criticize it as illegitimate “astroturf” operations started and supported by “rich” Republicans who are “sore losers.” Unable to reach the people by way of those traditional media sources, the movement has turned to the new media — the internet, twitter and talk radio — to get their message to the people.

Both protests, in both countries, seek justice and freedom for the people. Both movements face long odds on ever achieving their goals. At least, at the Tea Party Convention, there were no police with batons and guns.