The controversy surrounding the Iranian election results that have declared Mahmoud Ahmadinejad a landslide victor can be traced back to the purchase in 2008 of 10,000 touch screen voting machines by the Iranian government from Premier Election Solutions, previously known as Diebold. 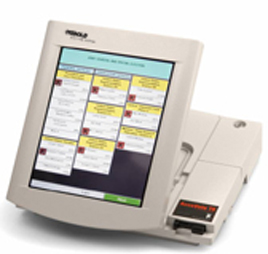 The touch screen Accu-Vote TS machines, which are wildly acknowledged by all of the left conspiracists to have selected not elected President George W Bush as US president in Ohio in 2004, leave no paper trail, and therefore rely entirely upon electronic records in achieving vote accuracy.

“It’s not who votes that counts, but all in who counts the votes,” said an Iranian official who spoke only on condition of anonymity.

Premier Election Solutions sold the machines to the Iranian government after they found their market for electronic voting machines depressed in the United States. “State of the art voting machinery has taken a back seat to verifiability,” said a disappointed PES CEO David Boies.

The AccuVote-TS is likely the widest-deployed of all of Diebold’s voting systems. It is a smart-card activated multilingual touchscreen system that records votes on internal flash memory. Voters insert a “smart-card” into the machine and then make their choices by touching an area on a computer screen, much in the same way that modern ATMs work. The votes are then recorded to internal electronic memory. When polls close, the votes for a particular machine are written to a “PCMCIA card” which is removed from the system and either physically transported to election headquarters or their contents transmitted via computer network.

The purchase of the Accu-Vote TS machines allowed the Iranian government to post election results within seconds of the end of voting, a process that has, in the past, taken hours to achieve.

The nearly two to one margin of victory by Ahmadinejad over his rival, reformist Mir Hossein Mousavi, mirrored perfectly the paper ballot results of the last 62 UAW elections in the United States, a fact of little consequence, but interesting nonetheless.

Mousavi, perhaps taking his cue from recent American elections in Florida and Minnesota, declared himself the winner, claiming his own 2-1 majority victory, and promising to fight the election results all the way to the US Supreme Court if necessary.

“I won’t surrender to this manipulation,” Mousavi posted on his website. “The outcome of what we’ve seen from the performance of officials … is nothing but shaking the pillars of the Islamic Republic of Iran’s sacred system and governance of lies and dictatorship.”

Dissatisfied with the election fraud, Iranian citizens have taken to the streets rioting and confronting police. Setting fires to trashcans and tires, smoke is rising in thousands of locations throughout the capital city of Tehran. In retaliation against the charges, the Iranian government has shut down power to internet websites and shut off cell phone power.

“The majority of Iranians are certain that the fraud is widespread,” said elections expert and analyst Albert Gore, Jr. “It’s like taking 10 million votes away from Mousavi and giving them to Ahmadinejad.”

“The same thing happened to me in 2000,” he added. In commenting on government attempts to squash the dissent, Gore was critical of Ahmadinejad. “HE BETRAYED THIS COUNTRY!” he shouted, “He played on our fears.”

Former President Jimmy Carter, commenting on the election from a Habitat for Humanity house he is building in Nepal, said, “While I am disappointed that the Iranian government did not allow me to come to Tehran to monitor the election results, I feel certain that the will of the people has been served, and the election was fair and honest.”

The former president went on to say that he has long known the Iranian people, as well as the leaders of the Iranian government, and has full confidence in their honesty.

“I have overseen free and fair elections in Venezuela, Cuba and Nicaragua and feel certain that the Iranian vote was every bit as honest as any that I oversaw and certified.”