Ever hear of Warren Redlich? A report on the NY Gov debate.

If Paladino expected to close the polling gap between Cuomo and him it didn’t happen, at least he didn’t make it happen. The Republican often stammered and only really caught fire about mid-way in the debate when he got a lot of applause calling for education reform.  Redlich  was much more effective, and that may well cut into Cuomo’s current lead. The Libertarian mocked Cuomo’s 250-page platform noting that Cuomo’s plan to give more power to the governor at the expense of the state legislature is a pipe dream.

After Cuomo bragged that he is the man to clean up Albany Redlich accused the Democrat of “being up to his neck in $23 million of special interest money.” Expect to hear more about one Cuomo contribution in particular: a $55 thousand dollar gift from an undisclosed donor on behalf of a small parking lot.

Redlich repeatedly made the point that NY must dramatically lower spending. Cuomo’s plan to cap taxes would only enshrine already too high taxes, Redlich opined.

Cuomo tried to sound like a conservative with lines like, “New York has no business future as the highest-taxed state in the union.” Unfortunately the debate format didn’t allow much back and forth so candidates statements were largely unchallenged.

Cuomo insisted all seven candidates participate,and so eliminated any real chance for Paladino to contrast himself with the former governor’s son. Every candidate received the smae amount of time insuring much of the 90 minute event was wasted on candidates who have no chance. Worst of these was Jimmy McMillan representing “The Rent Is Too Damn High” party. Loony, loony, loony. 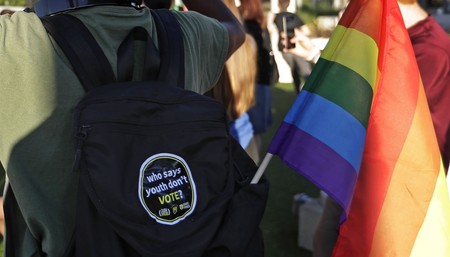 No, There Wasn't an LGBTQ 'Terror Attack' on Saturday. It Was Likely a Drunk Driving Gay Chorus Member.
John Arthur